Are you ready to party like it's 1920? Gatsby parties and flapper parties are all the rage, and we'll show you why. The 1920s was an era of glitz and glam, progress and counterculture. Decade-themed parties are very popular, especially around New Year's Eve, and a 1920s party is a great way to ring in the new year with a bang. The ever-popular speakeasy theme is certainly directed towards an adult audience, so you can Charleston the night away into the new year while the kids are in bed. If we've piqued your interest in this Great Gatsby party idea, keep reading for more 1920s party ideas. 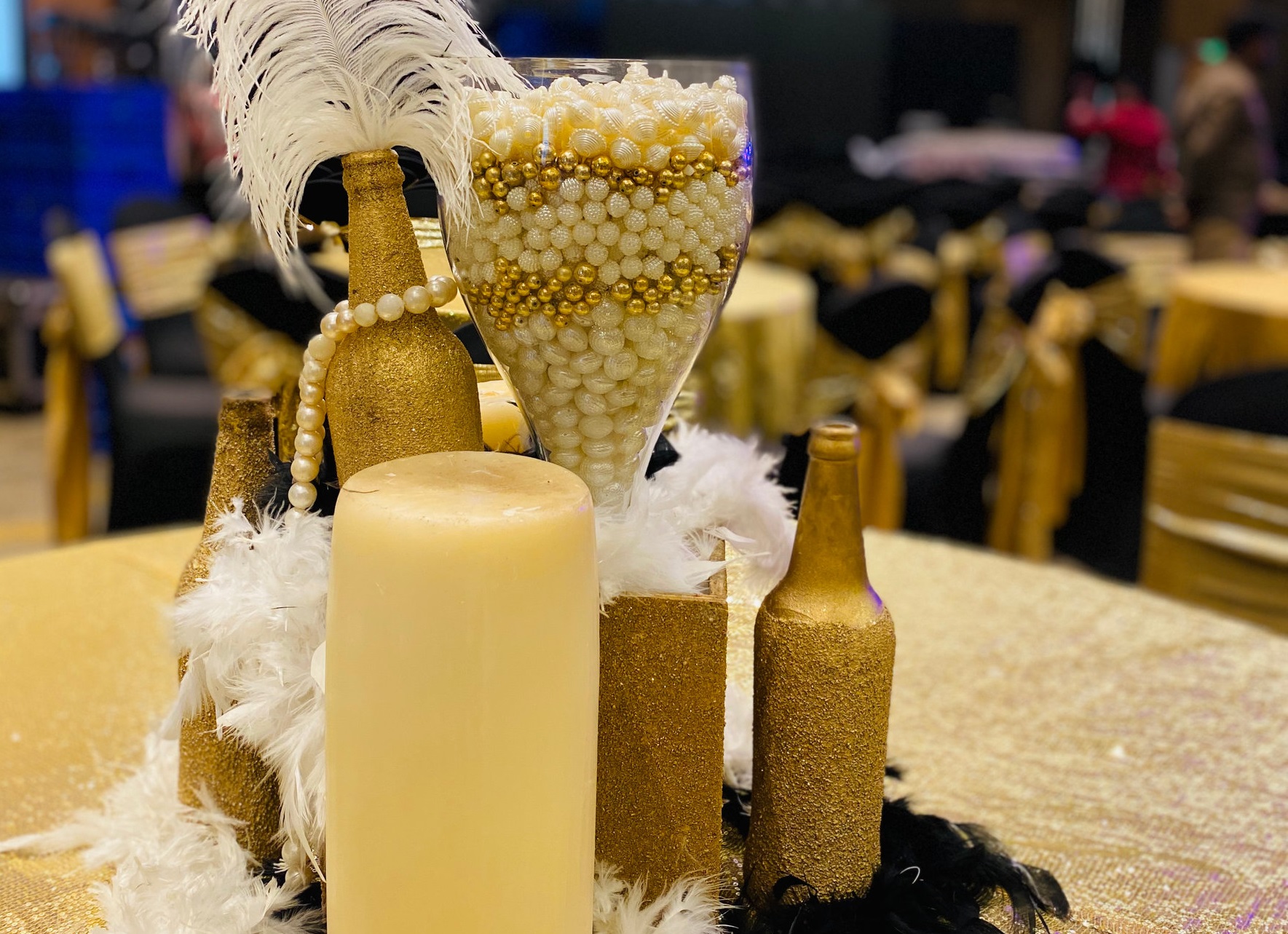 During the 1920s, films were black and white and most were silent as well. Classics like Metropolis, The Cabinet of Dr. Caligari and Sherlock Jr. graced the silver screen. While you may or may not have an easy time locating these movies on Blu-Ray, you can take in their art deco aesthetic when choosing your flapper party decorations. Signs with letters should be big and bold, and designs were often geometric in nature. If you're more of a fan of the silent film look, you can also use black signs with white or gold letters and a typical silent film border. Also, decorate using a variety of items that are black, gold and white. Balloons, pearl strands, napkins, plates, silverware, big white ostrich feathers and other Gatsby party decorations and accessories will look great when they're all color-coordinated! 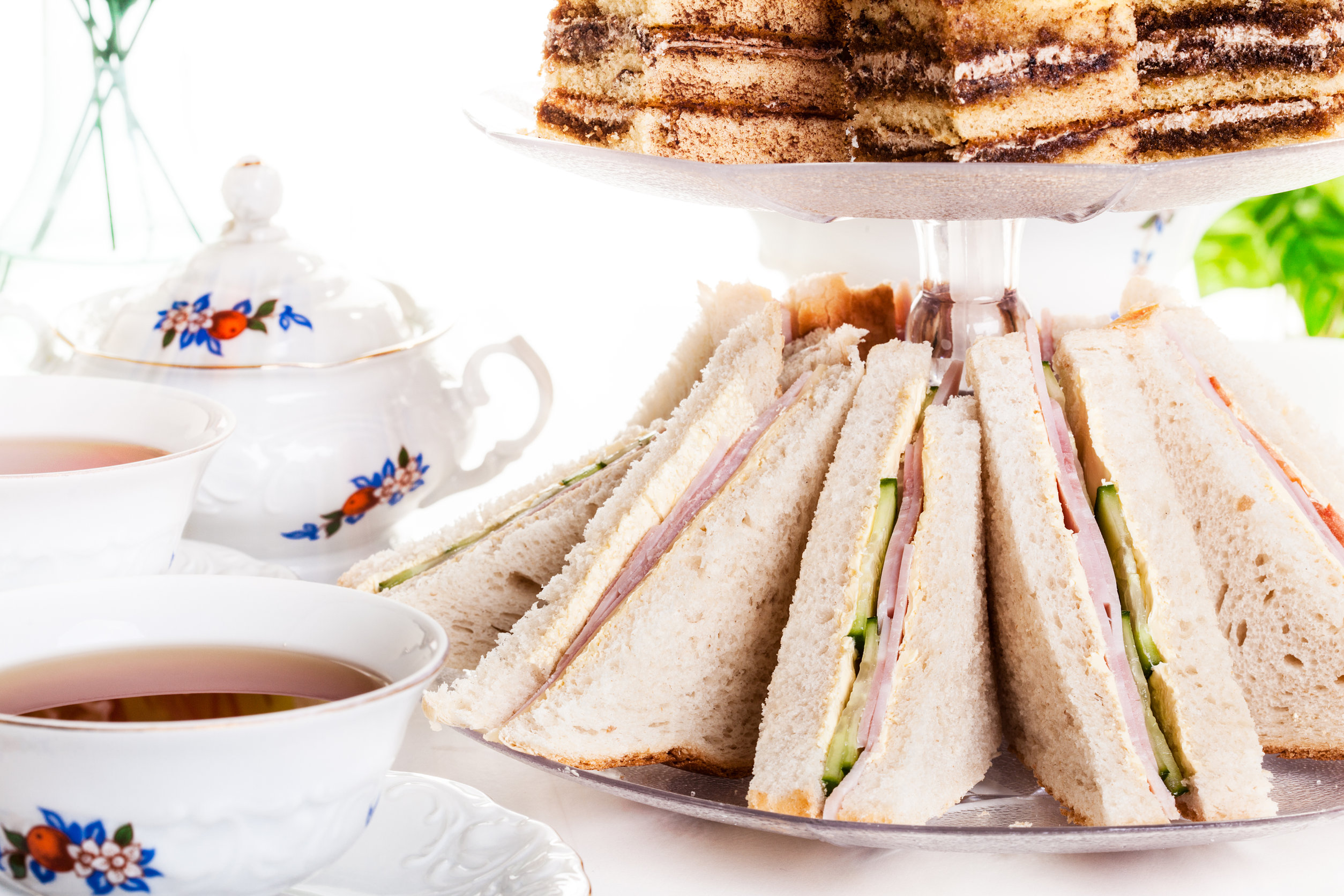 The 1920s was a time of prosperity, so get ready for a round of hearty foods. (Not necessarily healthy foods, mind you! And you may need to make compromises for vegan and vegetarian guests.) Not only were Americans just coming around to Italian food, but they were also absolutely addicted to ham, they slathered foods in sauce and you could find quite a few weird Jell-O recipes—it's peak 1920s cuisine! (Trust us on the Jell-O—that's a rabbit hole for another day.) Healthier options include light tea sandwiches with fresh cucumbers. Yum! 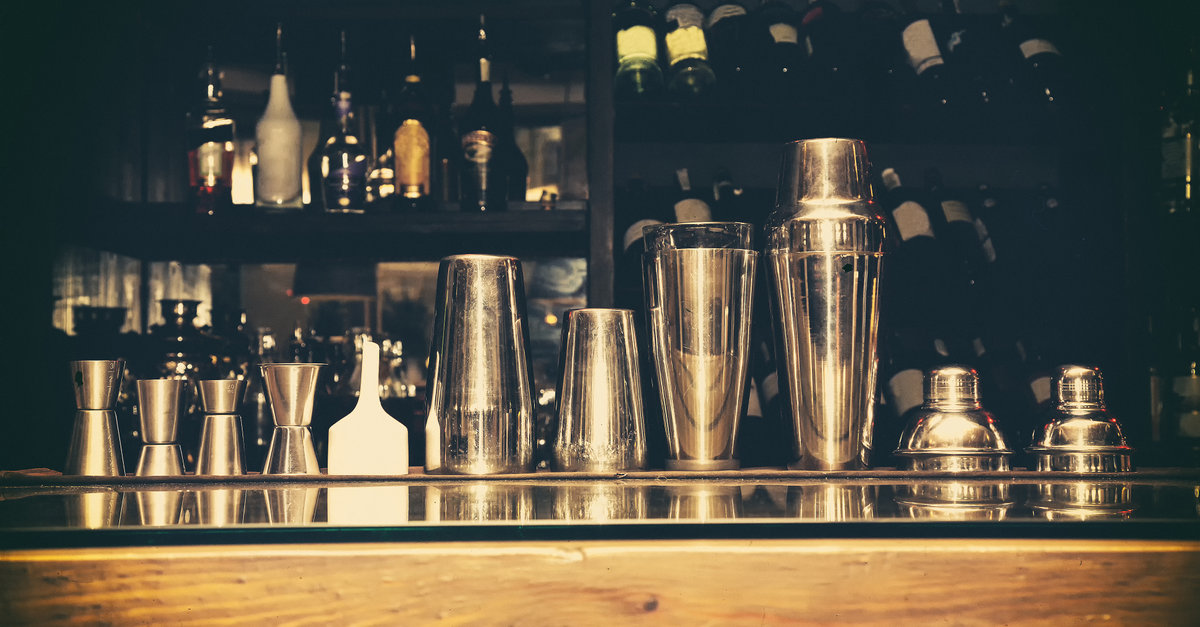 This leads us to the types of drinks you can offer at your party. During Prohibition, mixed drinks became more popular in an attempt to mask the taste of alcohol that seemed to be even more prevalent in bootlegged liquor. 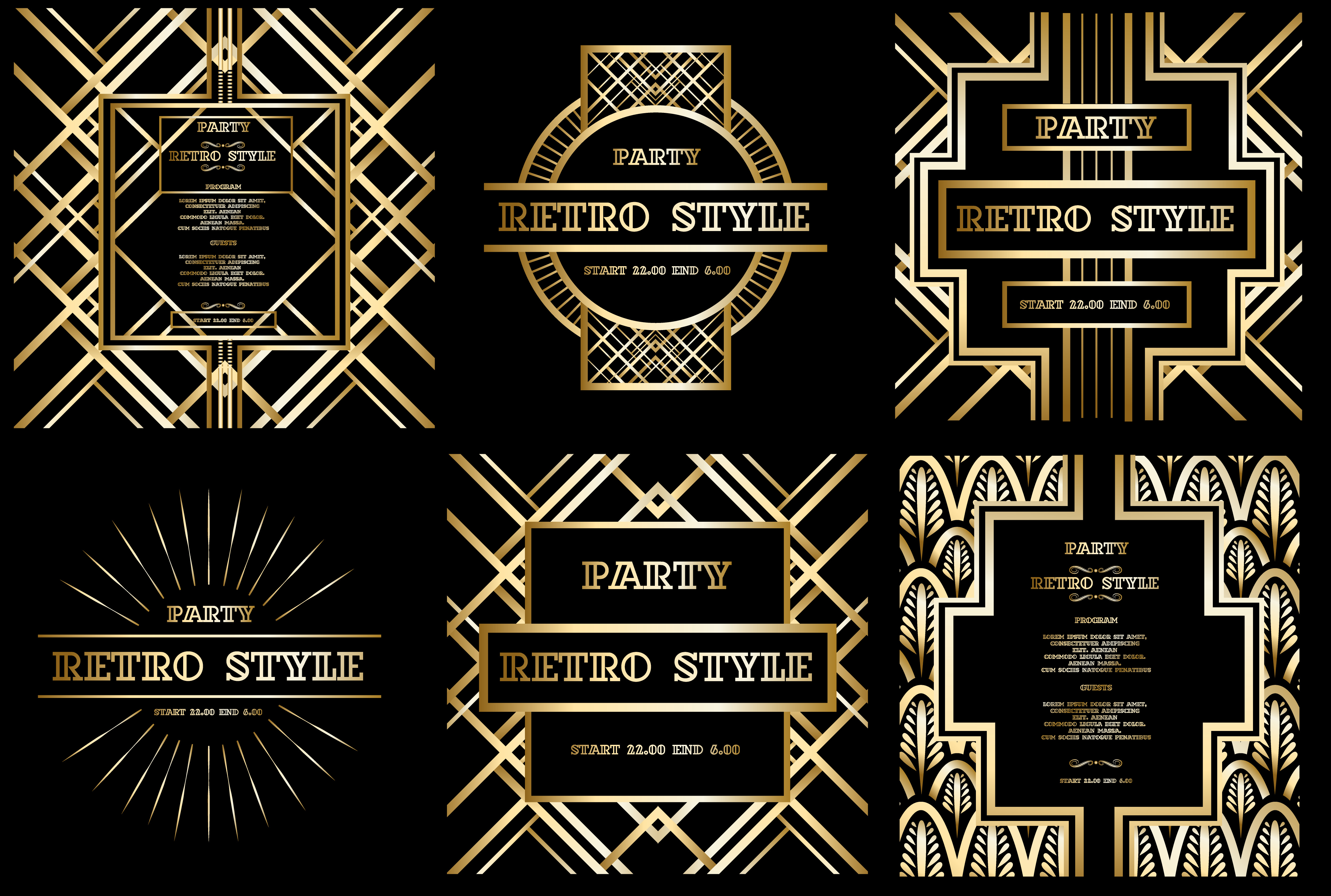 Do you remember what we said earlier about decorating using black, gold and white? Your party invitations will absolutely shine with gold accents on black paper. (If you really want to go all out, get the gold parts done in gold foil!) Use art deco-style geometric lines and shapes as a frame, and pick a retro font that matches well. Whether you choose to make your own 1920s party invitations or have them designed for you, guests will certainly be excited to receive an invite to your decade-themed party! 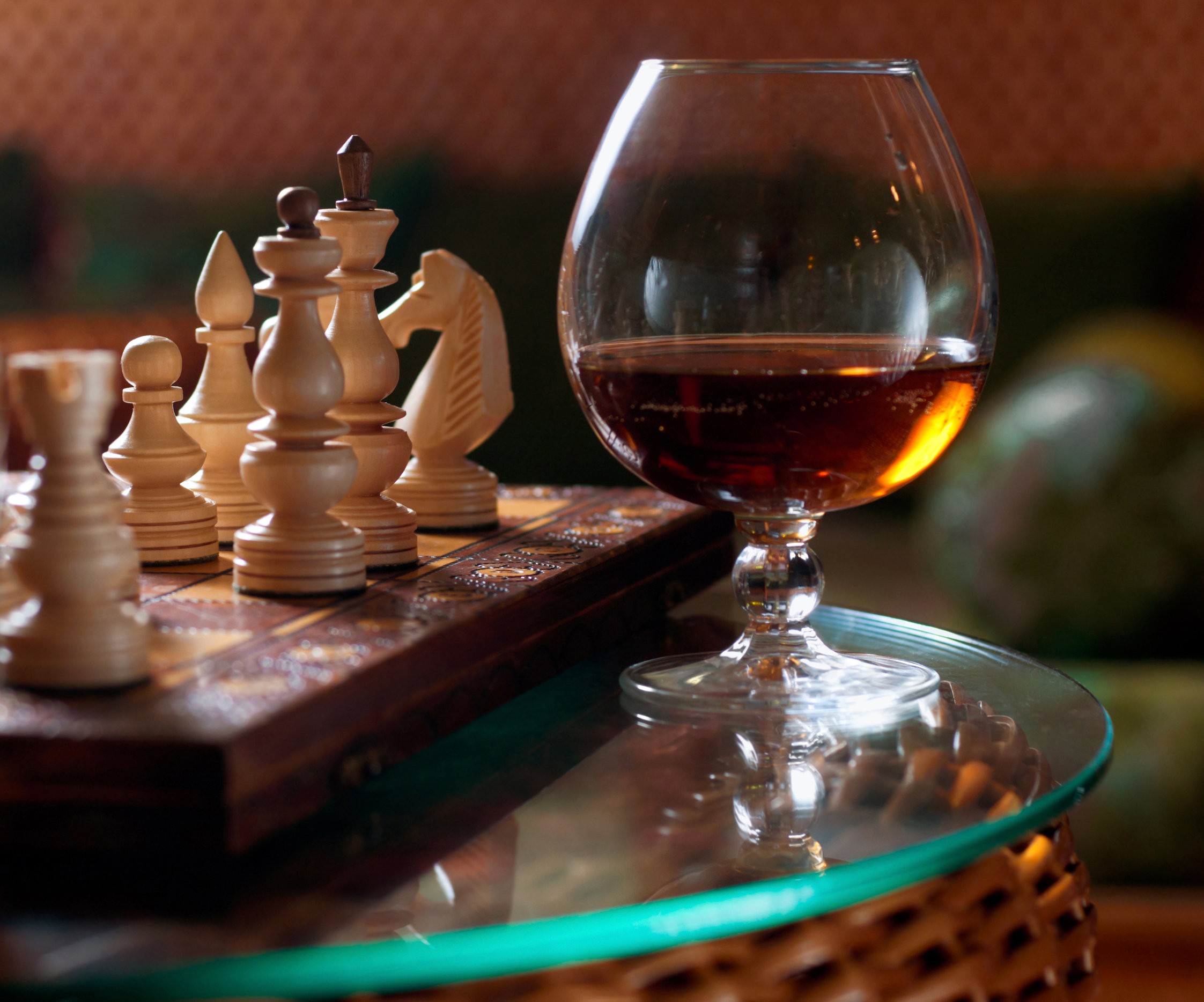 Anyone who can book a live show or a 1920s-themed murder mystery show should have no problem with entertainment for the night. However, if you're not made of cash like Jay Gatsby, we do have some other party activities for you and your guests! One simple idea is to provide quick and easy games at select tables where guests can mingle. Leave packs of cards and instructions for simple card games like Kings in the Corner, Go Fish, Old Maid and War. Crosswords were also making their way into newspapers, so crossword puzzle pages are another easy party activity. If you're looking for some more involved 1920s games, Mahjong and Chess were popular games in the 1920s. 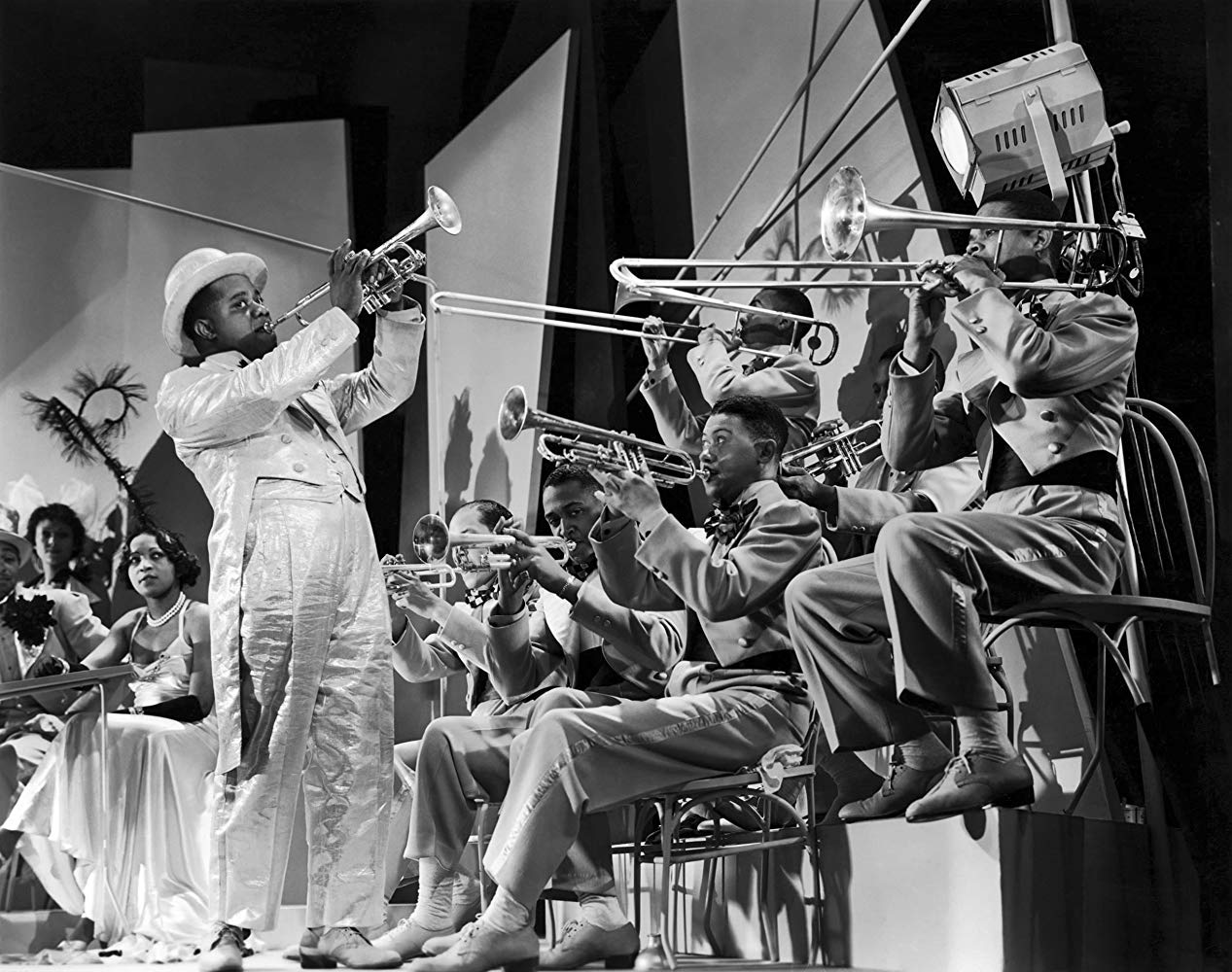 Let there be jazz! The 1920s was part of the period known as the Jazz Age, so you can't go wrong making a playlist filled with greats like Louis Armstrong, Count Basie and Duke Ellington. Don't be afraid to mix in some blues either—your guests won't want to miss tunes by artists like Bessie Smith or Lonnie Johnson. Some of their best and most popular songs include tunes like "West End Blues", "There'll be a Hot Time in the Old Town Tonight" and "It Don't Mean a Thing (If It Ain't Got That Swing)". If you know that your party guests really like to dig their heels into the dance floor, you can add some fun to the night by finding dance tutorials and teaching everyone how to do 1920s dances like the Charleston and the Lindy Hop. 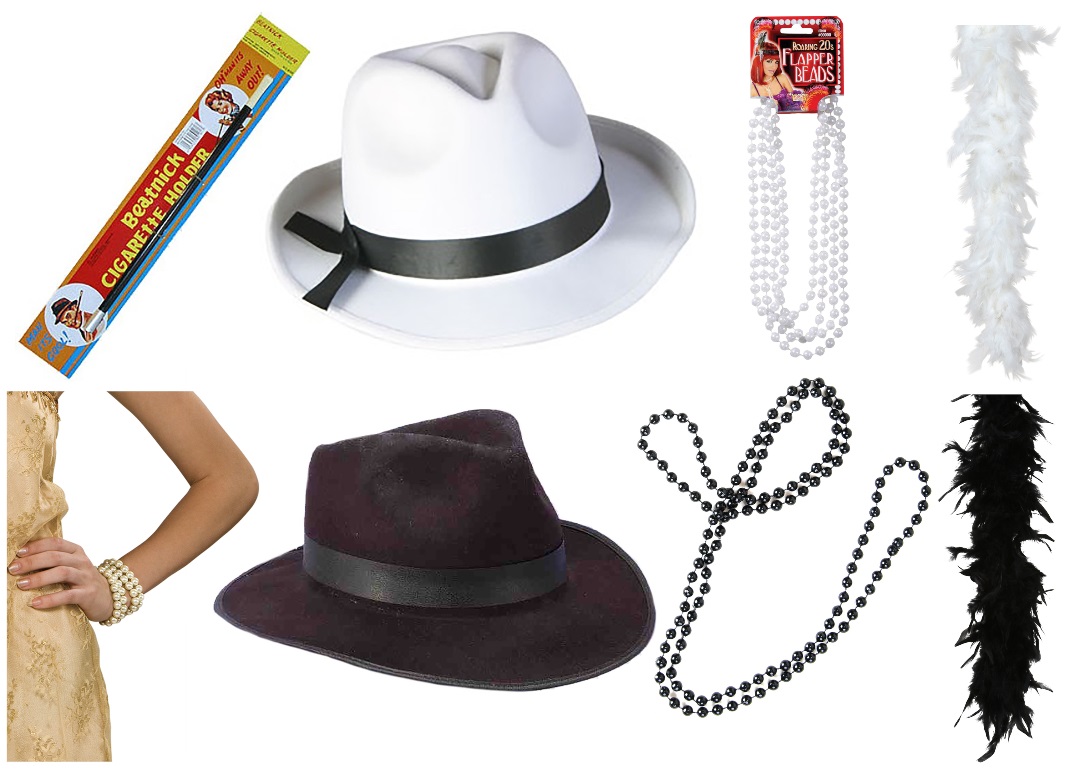 Send your party guests home with some inexpensive 1920s party favors. Whether you choose to put their gifts inside a fedora or a small gift bag, cheap party favors like beaded necklaces, feather boas and cigarette holders are always welcome. Add some black and gold tissue paper or confetti and some black and gold foil-wrapped chocolates or caramels, and you have a cute little party gift for each guest!

Hi! I'm Christy with HalloweenCostumes.com. I'm here to show you how to do some flapper makeup to go with your flapper costume for Halloween. Today I will be using a primer for the eyelid, which is cream-based. I'll be using navy blue eyeshadow (you can you other colors to kind of compliment it), including a white highlighter for underneath the brow, black eyeliner, a rosy, blush color for the cheeks, and a red lipstick with a red lipgloss for the lips. Let's get started!

So, first you're going to take that eyeshadow primer, that cream-based, warm it up on your fingertip, and then smooth it over the eyelid, over both eyelids. It kind of covers up all the imperfections of the eye, and also has that powder shadow stick to it quite a bit better.

So, go ahead and take your eyeshadow brush and that matte navy eyeshadow. You're going to start with that color and then do the contour, and then all around the liner of the eye, so you're basically going to be creating just a shadow smoky eye with the navy blue eyeshadow. And then I like to take the shadow and go along the bottom of the eye too to again create that smoky look. And you're going to do the same on the other eye.

And then you're going to take that highlighter color with just your shader brush or a clean brush. Take the white highlighter eyeshadow and then apply it underneath the brow bone, and then in the corners. And you may want a smaller brush to do those insides. And I like to take a little bit of the white and then put it where you're missing that eyeshadow, just right on that lid. And, the most important part is blending, so just make sure you get a nice, even eyeshadow color, so the navy kind of goes into the white, which goes back into the navy, just so it looks nice and continuous.

And then if you want, you can go ahead and add that black eyeliner. Just kind of hold that eyelid out and apply that black liner. And then bring it out into kind of a little cat-eye. That was popular during that day. You've already kind of created that line with the eyeshadow, so you're just kind of following it with your liner. And then go ahead and do the same with the other eye.

Next, you're going to want to take that eyebrow pencil, just the same color as your eyebrows, maybe a little bit darker if you're a lighter blonde. They did have a nice, strong brow line. So just go ahead and fill in your natural brow. Again, start from the inside of your nose out into the edge. So again, you're going to want to reach the eyebrow out to that corner. They usually have a thin, arching eyebrow.

Lastly, you're going to take that nice bright, red lipstick, and I apply it to the full lip. And then, top it with a little red lip gloss. I like to just put it in the bottom of the lip. Go ahead and put your lips together and you just create that pucker.

So now, you can go ahead and add thick black lashes with just a mascara or some fake eyelashes, to give that drama. Now all you need is your wig and your costume, and you are ready for your flapper night out. Thanks for watching! 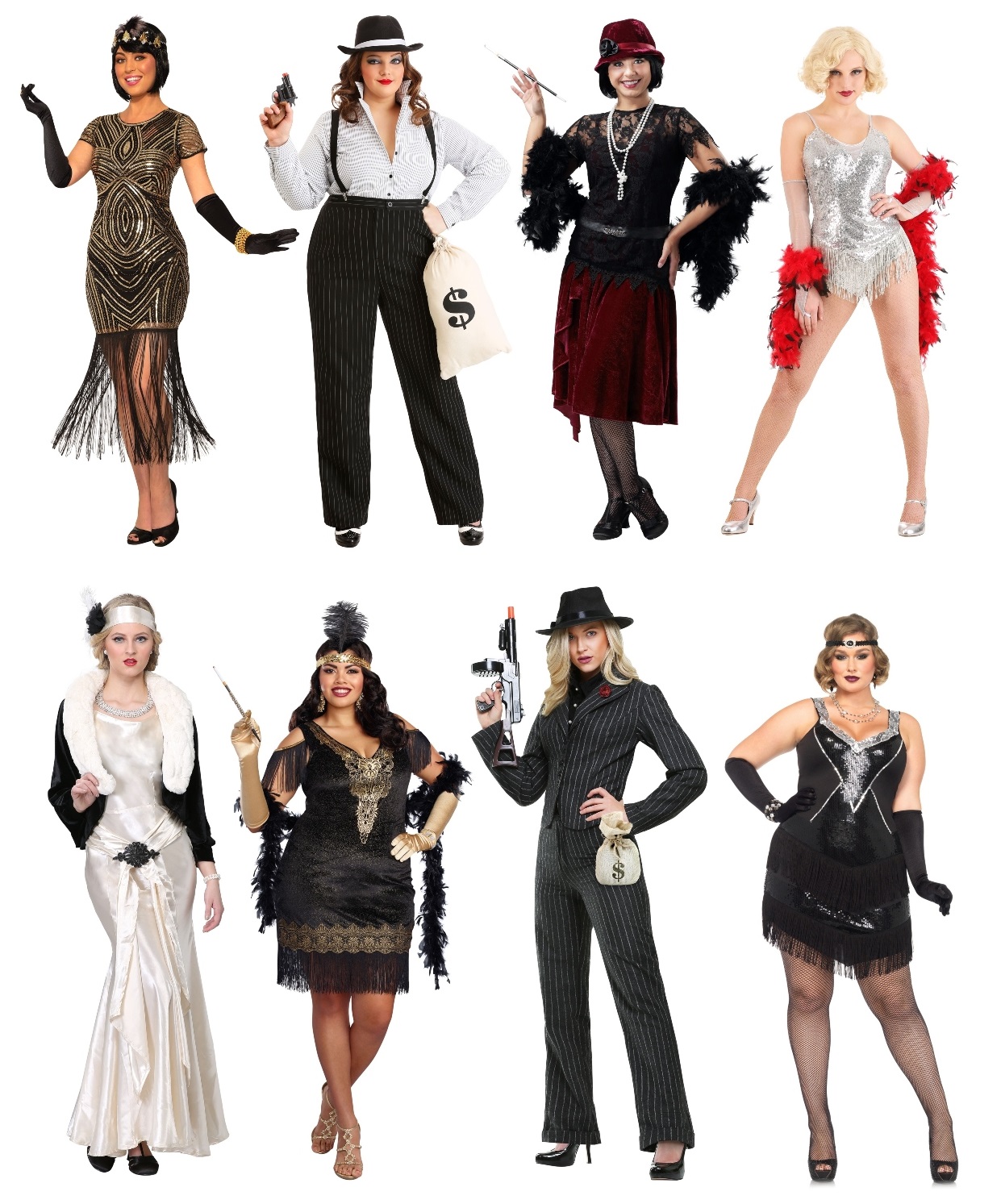 If you're planning on attending a swanky 1920s shindig, flapper costumes will naturally come to mind. There are quite a few flapper costumes for women to choose from, whether you're looking for fringe and beadwork or lace. You can even find a few movie character costumes from the era, including the infamous Roxie Hart from Chicago, or Daisy Buchanon from The Great Gatsby. Perhaps you feel more comfortable in pants—and that's okay! (Not everyone needs to attend in a Gatsby dress.) We have some women's gangster costumes that are sure to be plenty of fun, and they will keep your legs warm on chilly Halloween and New Year's nights. 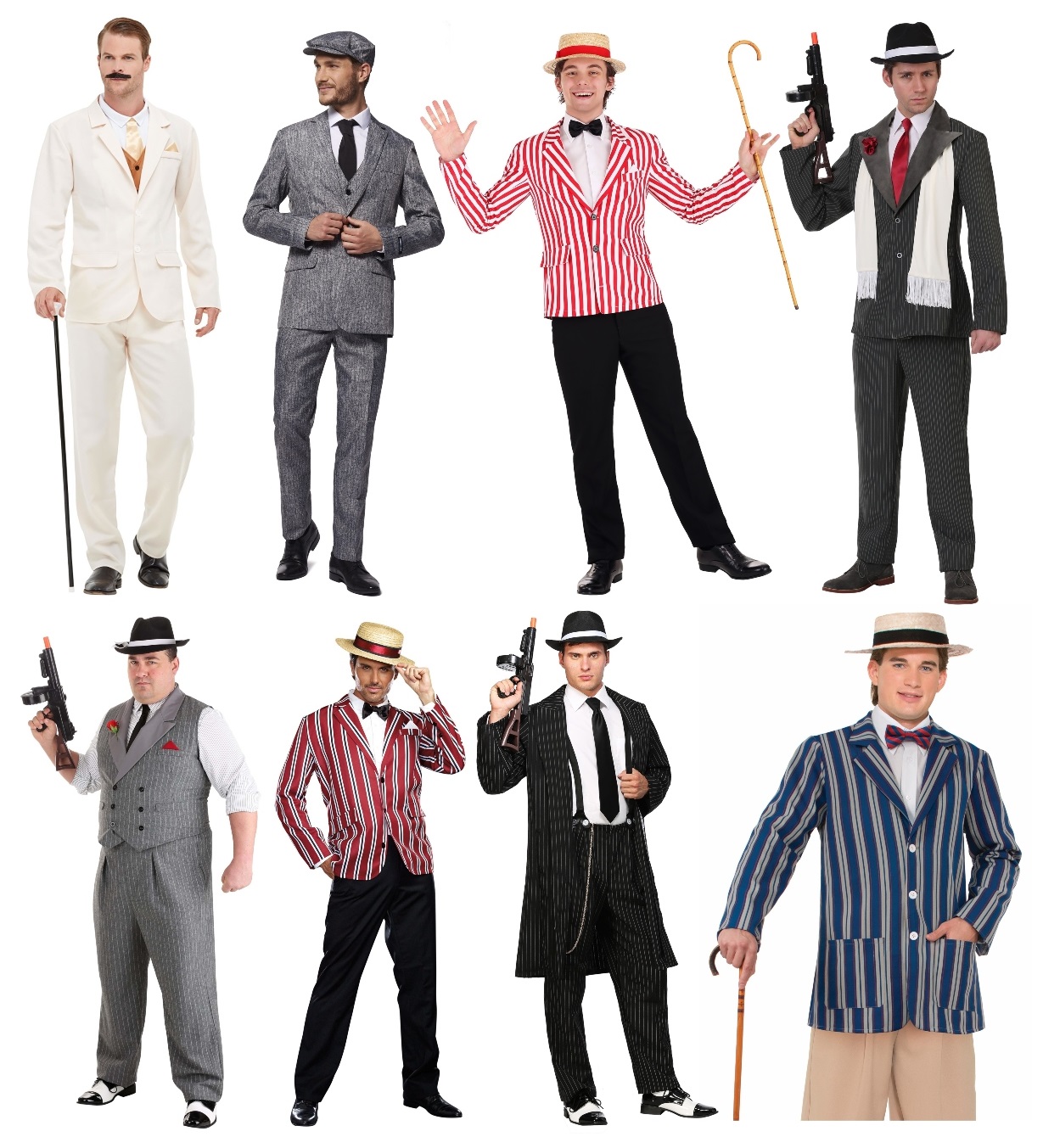 Gentlemen, you don't need to let the ladies have all the costume party fun. Look like a smooth criminal with our vast array of gangster costumes, or be a dapper cat in a boater jacket. You can even have a little fun dressing as one of the most famous silent film comedians with a Charlie Chaplin costume! Men's suits in the 1920s also had quite a few color choices, from white and black to gray along with some other colors, and they also played with pinstripes and thicker stripes. Don't be afraid to add an appropriate costume hat to match your wardrobe, whether you're looking for fedoras, flat straw hats or a bowler hat for Charlie!

We hope that these ideas helped you with your 1920s party planning! What are you looking forward to the most? Are you excited to wear flapper costumes and other 1920s outfits to a roaring 2020s party? Did the party food ideas make you want to get your oven started? Let us know in the comments below! Also, we'd love to hear your own Gatsby party tips. These themed parties are plenty popular (and we're especially looking forward to celebrating 1920s style in the 2020s), so additional ideas are always welcome! 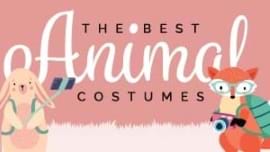 Video Game Costumes to Level Up Your Look [Costume Guide] 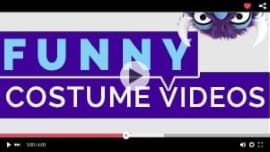