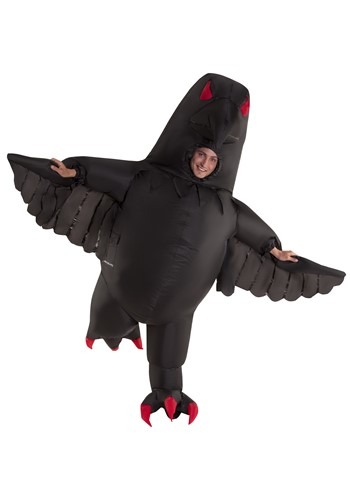 Crows might not have the best reputation. It's something about their black, glossy feathers, beady eyes, and raw croaking caw that make them into an iconic representative of the macabre. But if we look past the fact that a group of crows is literally called a "murder" and the crow's carrion munching ways, they're a rather wholesome family-oriented bird. While other birds might leave the nest and never come back, older siblings of baby birds might bring them treats and babysit. We imagine that they probably squawk a few tales to their baby brothers and sisters, too as their brains are said to be on par with the apes.

But this is Halloween, and if we're talking crows, we'll need to channel the icon of spooky that we know and love. Let the crows build their family units and wide vocabulary on their own time. This season calls for a big spooky crow and boy, do we have the big spooky crow for you!

This inflatable costume would bowl poor Edgar Allen Poe right over. Simply zip into the suit, fit the elastic cuffs to your ankles and wrists, then flip on the fan in the secret interior pocket. You'll need to slip four AA batteries into the back of the fan first but then you're ready to roll. Ready for some scary crow action? This inflatable crow costume with its red eyes and wide wings will transform you into a Halloween legend.

While you might be representing crows in the traditional, spooky fashion, you can always let the birders in your life know that you know that there's more to crows than their creepy features. We like to think that crows actually like their tough reputation. Make them proud this Halloween and head out into the night with a hearty caw!