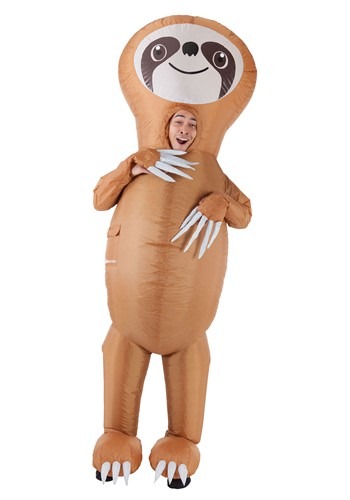 In Defense of Sloth

Sloths get a bad rep. Sure, they sleep 15 hours a day and move slowly when they're awake, but that doesn't mean they're lazy! Sloths actually work pretty hard. They might not move fast, but they can climb and even swim if they ever feel like it... Ok fine, so maybe they're a little lazy, but they live dangerously! Most of their time is spent literally dangling from tree branches, after all. Plus, sloths put their lives at risk every time they go to the bathroom. We're not kidding! They only go once a week and they have to leave the safety of the canopy to do so. Now that's hardcore! Right?

Ok fine, maybe living dangerously isn't what sloths are known for, but there's a lot more to them than napping and eating leaves. If anyone has ever assumed you were napping through a movie when you were really just concentrating on the soundtrack, then you can relate. If you sometimes experience occasional lethargy (after a day of hard work!) then this costume might be perfect for you.

This Adult Inflatable Sloth Costume is a great outfit to hang out in. It has a motorized inflation device, so all you need is 4 AA batteries and maybe a nap, then you can rest easy for the rest of the night. The sloth's feet rest on top of your feet, and his hands rest over your own, so you can transform fully into the animal everyone has always envied. The zipper closure and elastic in the head, arms, and legs will keep you secure, so you can toss and turn as much as you'd like. Your head will be cradled right below his, almost like a pillow... Man, we're getting a little tired!

If you've been stressing about what to wear for Halloween, relax! We've got you covered. Whether you get six of your friends to be the deadly sins with you, or go stag as the creepy sloth meme, this one size fits most costume is sure to be a hit at any party, and would serve as an excuse to just hang out, eat a lot of food, and not move too much (sounds like our kind of evening).