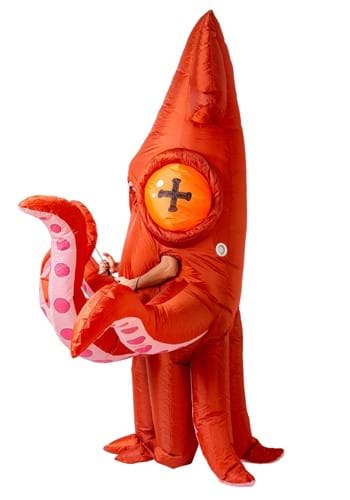 Giant squids probably love hip-hop concerts. Why? Well, just about every single one we've ever been to, one of the MCs always tells the crowd to put their hands up in the air... and in some instances, like you just don't care. This is an occasion that a giant squid is well prepared for. They have eight, count 'em, EIGHT tentacles, which are basically just hands that work better underwater. It's too bad they don't hold any hip-hop concerts 20,000 leagues under the sea...

Well, maybe we can't bring a concert to the giant squids out there, but perhaps you can bring the squid to a concert when you dress up in this Inflatable Giant Squid Costume for adults!

This cephalopod-style costume will have you feeling like a critter from the depths of the ocean with a ton of arms! This costume comes with a windbreaker-style bodysuit. The zipper is conveniently located on the inside of the costume, making it easy for the wearer to open and close it themselves! Elastic in the feet, neck, and upper arms all help keep an airtight seal. The costume comes with 2 fans built into the costume. With the flip of a switch, the fans will inflate the costume within minutes! The fans keep the suit inflated while you party it up as one suave squid. The fans use AA batteries to operate, but can also be powered by a USB power source (not included). The costume also comes with a set of cords that let you control all of the tentacles and you can wave them around like you just don't care!

Whether you want to terrorized submarines in the ocean... or you just want to be the squid with the most arms at the next concert, this costume is the best way to do it!