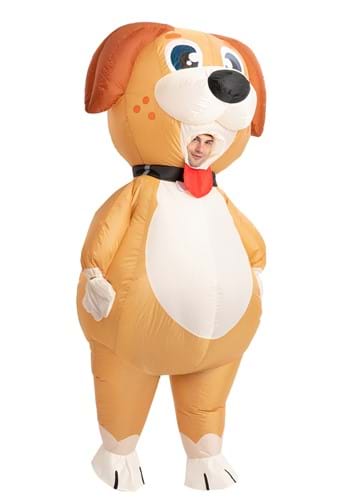 Everyone loves that person who brings their pooch to the party—it's an instant conversation starter and levity agent. So when you come in wearing this Adult Inflatable Dog Costume, you're being loyal to the party host and giving them an assurance: this Halloween bash is going down in the books!

Because let's be real, even the best-planned parties can crash and burn. Sometimes it's the wrong mix of people, or the wrong theme, or the wrong playlist. But when a dog arrives, the mood picks up, people have more fun, and everyone can relax. Have a crush? Talk to them about your pup. Is there a friend on the scene who you'd rather avoid? Oops, sorry! My dog needs to go out for some air. You get the idea. Work this dog to your (and your party's) advantage!

We have been scouring the Halloween costume scene for a while now to bring you the newest trend in dressing up, and it's finally here—inflatable costumes! This blow-up pup takes "being a dog for Halloween" to a whole new level! That's because just about anyone can slip on a jumpsuit, but it takes a true commitment to the spirit of the season to inflate yourself into a walking parade float. But that's just what you'll do in this brown puppy costume. It's as easy to wear as a cloth jumpsuit, but obviously, the visual impact of your inflatable dog body and enormous dog head gives you something to bark about!

No Bones About It

Sure, it may take you a few minutes to get used to your new (awesome) form, but becoming a dog is never easy. And it's totally worth it when you see how pleased all the humans around you are at your presence!