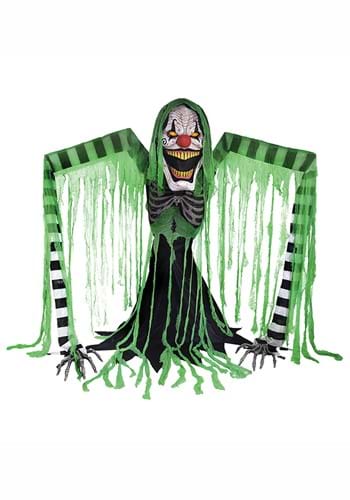 Doesn't it feel like certain things just don't show up quite as often as they used to? Only a few short centuries ago, it seemed like folks were always stumbling across unicorns and dragons, or getting bombarded by ecstatic visions of angels and ghosts. Then there are more modern mysteries, like, "where did we put our car keys?" Or, "what's the closest establishment that will deliver a burrito to my living room?"

Every so often, it's good to remind people that mysterious forces could be lurking around every corner. It keeps them sharp, you know? But we're guessing that if you hang our missing car keys on your front porch, people will be more confused than enlightened. Here's something they'll miss at their own peril and understand down to their bones: this primally-spooky Six-Foot Underworld Clown Animatronic Prop. It's a six-foot-tall monster of a prop whose towering frame sways, eyes light up, and mouth moves and speaks phrases when activated by an infrared sensor, pressure pad, or an on/off switch.

Set it in your front yard (but don't let it get wet; it won't tolerate water, to put it lightly), entryway, on your porch—dangerously close to your neighbor's yardline, even. For one glorious moment, force your neighbors to look upon the spectral face of the funnier corner of the underworld! Add some playhouse music, and they'll be shaking in their boots.