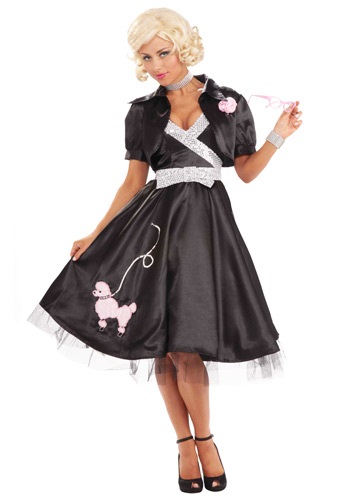 Look, we know what you're thinking...what's the big deal with calling it a "Poodle" skirt? The obvious answer is - just in case you didn't notice - that the skirt has a poodle on it. But this particular design became all the rage when a 25 yr old named Juli Charlot needed a cute skirt to wear to a holiday party in 1947. She couldn't sew, and she didn't have a bank full of money, so she bought some inexpensive felt. Felt was the only material available in post-war America that was wide enough to do what she envisioned, which was cut a complete circle out of the fabric, and then make a hole for her waist in the center of that felt circle...thus, no seams, which equals no sewing!

And while we would have called that a "donut skirt" (mmm...donuts...), she appliquéd Christmas trees to it, a little design trick that turned out to be a huge hit at the holiday party. Such a huge hit, in fact, that she started making more of these skirts to sell so she could raise money to go to design school (and finally learn how to sew). The most popular design she sold? You guessed it: The chic, well-groomed poodle with a swirly leash. Hence, the circle skirt began to be known as and forever coined The Poodle Skirt, which remains one of the most memorable symbols of 1950s Americana.

But while the Poodle Skirt might already be famous, we've gotta tell ya...this 50s Poodle Diva Costume has to be its greatest hit! The rich-looking satin fabric will have all the kids at the hop all shook up, and the silver sequin trim on the shoulder straps, front neckline, and belt is the stuff of earth angels. And anyone would be a fool not to fall in love with the fitted bodice and bouffant skirt, not to mention the short jacket with puffed sleeves! Add a cute pair of heels, a choker, and a bouncy ponytail or bouffant wig to this 1950s Poodle Diva Costume, and you'll be Sweet Sixteen all over again!