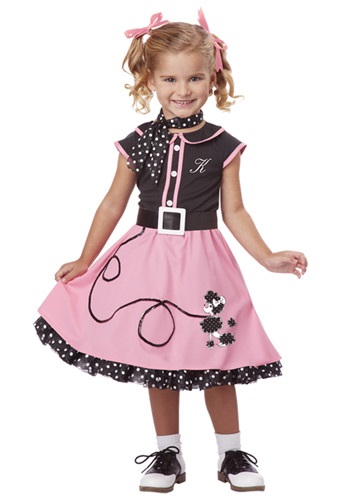 It's surprising how much people love the 50's, seemingly more than any other era. But when you think about it, it really makes sense. America was just beginning to come into its own. The civil war was over, the world wars were over, and things were beginning to feel new. There was new music, with a whole new era of rock n' roll just beginning. There were new foods and restaurants to enjoy them in, as this was the first decade in which burger joints and soda fountains really started to take off. (the beginning of current day fast food...) And, of course, there were plenty of new fashions, such as the poodle shirts, saddle shoes, and the infamous blue jeans with a white t-shirt so famously modeled by heartthrob singers of that day.

These days, America doesn't always seem so new and exciting. We take a lot of things for granted and quite frankly forget where we came from. That's why this Toddler 50s Poodle Cutie Costume can be so much fun, it reminds us of this simpler time when things were really fresh and exciting. If your little girl enjoys dancing, maybe it's time to bring her to her first sock hop!

This is a 100% polyester interlock knit, with a dress styled as a black blouse and pink skirt. The blouse portion is black with pink piping and edging, and the pink skirt has printed black and white poodle and appliqued sequin leash. It comes with a faux leather belt with decorative white plastic buckle which fastens with Hook and Loop fastener, and a polka dotted knit mesh scarf which also fastens with Hook and Loop fastener. Add a pair of saddle shoes to complete the retro look!