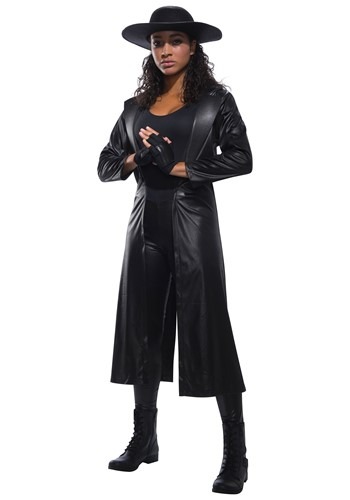 The Undertaker never goes away. He always finds ways to reinvent his look while maintaining his take-no-prisoners style of wrestling. He started out as the quiet but menacing wrestler, who's imperviousness to pain made him a true terror in the ring. After a short hiatus, he made his way back into the ring with a bit of a promotion. He went from simple Undertaker, obsessed with body bags, to the powerful Lord of Darkness. Then, he spent a short stint as a rugged biker and finally, returned to his creepy roots as the dark figure. Perhaps it's time for yet another new incarnation of The Undertaker... you!

With this WWE Women's Undertaker Costume, you get to take on the role of wrestlings longest-lasting legend.

Based on the iconic and devilish outfit worn by the man himself, this officially licensed WWE Undertaker Costume for women comes with a black jumpsuit that has an attached, faux leather trenchcoat, which is also black... of course. It also comes with a pair of black, fingerless gloves that will help get your hands ready for a grudge match. Finally, nothing adds an ominous aura to your look quite like a black, cowboy hat. That's what the Undertaker wore for many years while making his grand entrance into the ring and if you want to continue his legacy, then you're going to need a hat that's just as menacing! Put it all together and you'll be ring-ready in no time.

If you've been looking for a way to make your debut into the world of wrestling, then it might just be time for you to suit up in this officially licensed WWE costume! You may be the one to usher in a new reign of darkness into the wrestling world!