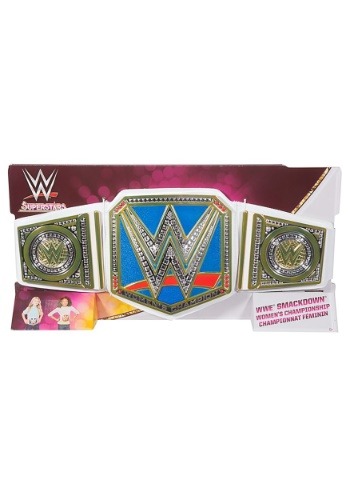 Ah, so we have a champion on our hands. And, newsflash. It's your girl! It really is!

Okay, okay, we know she hasn't actually hopped into the ring to defeat Becky Lynch or Alexa Bliss. But she's about to do the next best thing. She's about to suit up in a WWE Costume for Halloween. So, it's only logical that she wants to dress up as a champion, too. And all you'll need for that is this WWE Smackdown Women's Championship Belt!

This WWE Smackdown Womens Championship Belt is officially licensed from WWE partners Mattel. The faux leather belt has attached plastic plates with a design based on the real Smackdown Championship Belt. Sized to fits children ages 6 and up, it secures with a hook and loop fastener strip in the back.

We're big fans of wrestling around here, which is why we've got the web's largest selection of WWE Costumes. Whether you're shopping for a WWE Diva costume or need to pick up styles for adults, we've got it covered. Shop our entire selection to make sure you see all the coolest items!