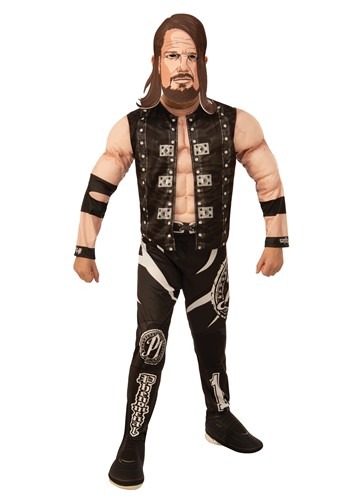 The House That AJ Styles Built

AJ stands for "Absolutely Jacked." Kidding, kidding! It stands for his real name, Allen Jones—but the absolutely jacked comment is still technically true! Styles has been wrestling since 1998 and has become a fan favorite through the years for his dynamic wrestling, not just for WWE but in associations around the globe. Your kid will be representing a global wrestling superstar when they don this WWE AJ Styles Kids Deluxe Costume. Get ready for some punches and grapples, because this is one inspiring costume!

AJ Styles gives off some serious vibes with this all-black ensemble! First is the iconic black vest. Styles wears lots of black vests in varying styles (pun unintended). Another signature part of his look are the long, skin-tight pants he often wears during his matches. These ones are black with jagged white stripes. Both pants and vest feature the "P1" logo for the Phenomenal One. The whole outfit is one piece, with closures at the back, and comes with muscle pads for additional awesomeness. Just slip on the felt mask, and your little wrestler is ready to become the champion of Halloween!

Okay, so your kid won't be wresting any other kids in a ring this Halloween. Or maybe they will, if that's part of the fun! Either way, this AJ Styles Costume is sure to put a smile on your child's face. Everyone dreams of being their hero. In this muscle-padded, full-body suit, your little one can dream of taking down the next wrestling great and making the championship belt their own. Check out our other WWE costumes for other wrestling pros to create a kid Bullet Squad, or to find a different favorite. No matter what, there's a wrestling hero in your neighborhood this year!