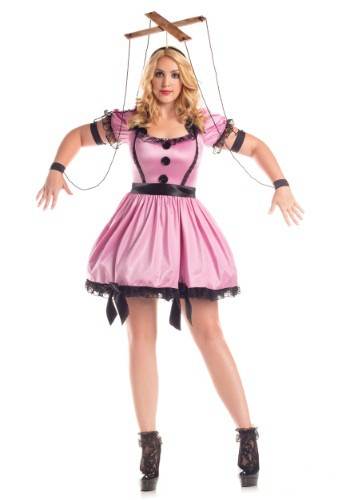 It was Isaac Newton who said for every action there is an equal and opposite reaction. And we’re pretty sure that he would have enjoyed this Women’s Plus Size Pink Marionette Costume almost as much as Pinocchio enjoyed ditching his strings when he became a real boy. But this outfit isn’t really about the laws of physics or weird old fairy tales: it’s about how one clever illusion can transform a simple black-and-pink dress into a thought-provoking work of art.

The first thing the viewer will notice are the striking color combo and the playful ribbons and lace. Then, of course, the marionette’s control bar, suspended above your head by a convenient and discreet headband apparatus. But once they’ve gotten over the sheer fun of your magnificent ensemble, they’ll begin to ponder some interesting questions. Who, really, is the puppet? Who is the puppeteer? Are we the captives of our own actions? Can there possibly be such a thing as true freedom?

And if you’re in the mood, take their quizzical stares as an invitation to talk philosophy, psychology, or Italian folklore. If that goes against your grain, don’t say a word—just wiggle those sticks and high-step it out of there!

No matter how you decide to play it, we think you’ll enjoy your time pulling (and being pulled by) the strings attached to this inventive set of threads. A costume that’s this much fun rarely comes in a package this clever and convenient. Plus, it will give you the chance to try out some really wild and woody makeup effects!

Product Reviews  Write A Review1 Review
Incomplete
By Anonymous / July 21, 2018
The dress was fine and by far the least of my problems. My promblem stemmed from the headpiece(s?). The costume came with a plastic hollow rod and the foam puppeteer handles. The holes to put the rod through in the foam handles were much too small. They did not fit. Even if they did there wasn’t any was to put it on my head because it did not come with a headband. I also recieved a bow that was not pictured. There was also no way to attach this bow to any part of the costume or the hair. It also came with a “petticoat”. It was pretty ineffective and did nothing for the costume except make it stick up in unfortunate places.I ended up ditching the puppet look all together and just went as a princess.
Was this review helpful to you?YesNo
Get 20% Off