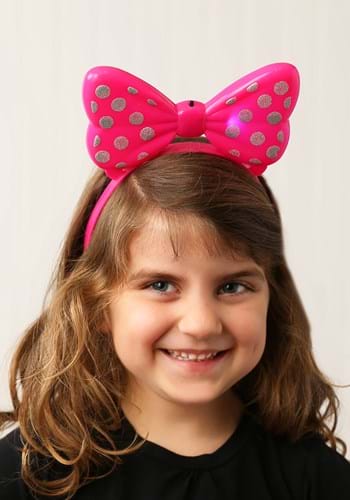 Queen of the Mouse House

When you think of Disney, it's totally expected that the Disney Princesses are among the first things that come to mind. They're graceful, lovely, and have true hearts of gold. Often they're the ones that show the world is worth saving and half the time they're the ones doing the actual heroics themselves!

But, amidst all of the sweet Cinderellas and adventurous Rapunzels and go-get-'em Meridas, there remains one gal who rises far above the Princess rank! We're talking about the gal who is really in command of the Disney dames: the righthand gal of the epic Micky, himself, Minnie Mouse! If the other ladies are princesses, Minnie is the queen!

What is more Minnie than a sweet personality and a clever mindset? Well, we've gotta say that it is her iconic bow! Who wants to deal with a weighty crown when you can wear a delightful accessory like this officially licensed light-up Minnie Mouse Headband? This is a plastic bow with silvery dots that lights up to show the world your gal is a Disney queen!

Throw out the whole Disney Princess limitations when you make sure that your kiddo feels like a Disney queen! Don the look of the truly epic mouse with this gleaming Minnie Mouse headband.