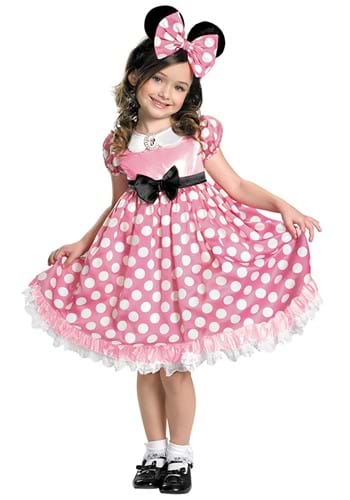 Minnie Mouse is one of the sweetest characters we’ve ever met. She tries to be kind to nearly everyone she meets, and even goes as far as trying to solve problems for everyone, even if they’re her enemy. However, that doesn’t mean she never causes trouble! She is also a little stubborn and tends to do what she thinks is best, regardless of the advice of her friends. However, this also means that she can be confident and independent. When the nefarious Pete causes her to be in a “damsel in distress” situation, she often aids in her own rescue or handles it herself before Mickey even gets there. Overall, we think that she’s not only a character whose adventures are fun to watch, but also one that kids can try to imitate. The world would be just a little better if we were all more like Minnie!

Although Minnie is often seen wearing her signature red dress, she also enjoys a little pink once in a while. This Minnie Mouse Pink Glow in the Dark Dot Dress is definitely something she would wear! The built-in petticoat keeps the skirt nice and puffed, and the sash at the top is also sewn in so it doesn’t go missing. The ruffles and puffed sleeves give the dress a delicate touch, and the outfit comes with a headband so the wearer can even have Minnie’s ears and signature bow. And the best part of this costume is a feature that really shines. After being exposed to strong light, the polka dot fabric will glow in the dark! It’s the perfect way to stay visible if you’re wearing this outfit to trick-or-treat, and just makes it a little more fun to wear.

We know your little one will be cuter than ever in this Minnie Mouse Pink Glow in the Dark Dot Dress! They’ll have tons of fun wearing it for Halloween, parties, or dress-up play.