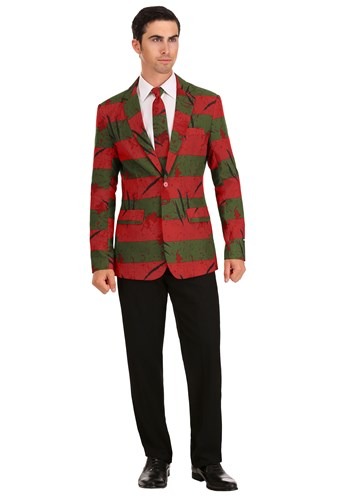 A Refined Kind of Nightmare

Look, let's just be honest. Freddy Kreuger has a pretty bad rap. And, maybe it is just a bit unfair. Yeah, of course, he was burned to death by the neighborhood because he was pretty twisted. But, who knows what kind of wonders that therapy and a good conversation to work through those inner demons might done?

Okay, sure, there was also that whole child killer and boiler room craftmanship going on that probably made it a good deal more problematic. Perhaps in another world, though, Freddy might have been a more refined kind of bloke. Perhaps Fred Kreuger might have been a gentleman. A scholar! Just dream of what might have happened.

You can slip into this mysterious dreamworld yourself when you try out this officially licensed Freddy Kreuger Suit Coat. This jacket is fully lined and dreamed up by our own in-house design team. It wears just like you'd expect a formal suit jacket to feel like, but it has that little something extra. The red and green design and the matching tie, to be specific!

Channel the look of nightmares in a rather formal way with a suit jacket that lets everyone know that you've got some pretty awesome views on horror movies. (Just leave the glove at home or all heck will break loose!)