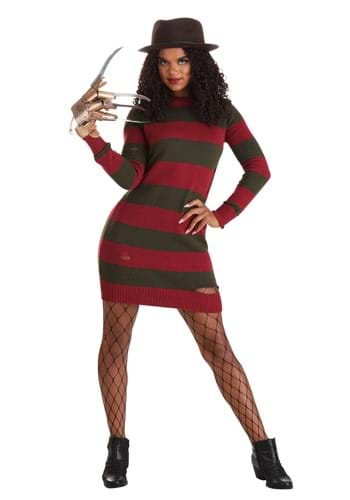 Mr. Krueger is no good for lots of reasons. Living his one mortal life as a serial killer tops the list. Then following that evil streak up with an afterlife stint as a dream demon just really made him a total nightmare. But there’s also his sense of fashion! We’re not sure that color palette has ever truly been “in.” And while he tops it all with a semi-trendy hat, Freddy still looks a complete disaster.

If you think about it, though, Freddy is essentially the physical manifestation of people’s fear. So, while that way, last season's look suits his nightmare persona, some fashion-forward thinking could at least lessen his impact.

Put some power behind that frightening dream with this exclusive Freddy Krueger Costume Dress! Inspired by Elm Street’s terrorizer, this cotton-blend sweater dress is a fresh update on the decaying monster’s look. The officially licensed dress sticks with the familiar muted red and green colors, so you’ll be instantly recognizable as a fashionable Freddy. Well-placed tears and pulls give the costume the look of being moth-eaten or buried right along with the wearer. Pair the pullover costume dress with some killer boots, a fabulous hat, and patterned tights, and you’re ready to do a scary chic sashay down the street!

Questions & Answers
Q: Do the costume come with the razor hand