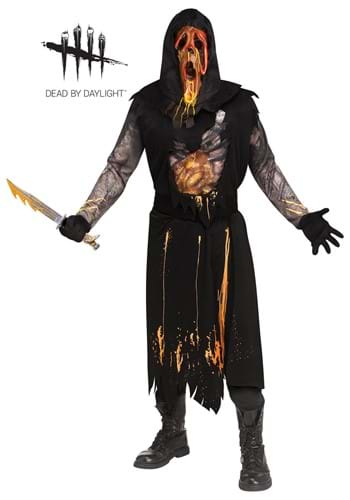 Something Wicked This Way Comes

Once upon a time, a terrible scourge stalked the small town of Roseville. A series of grisly murders went unchecked by the police's frantic investigations and the perpetrator was still free to strike again. The serial killer broke into people's homes in the dead of night, moving through their houses as easily as if he lived there himself, hunting down his victims, and stabbing them multiple times. Other than a shadowy figure caught on camera wearing a ghost mask, no one had any leads. Once, a victim, fueled by desperation, managed to get his hand on a lighter and thrust it upward toward the killer's mask. The plastic began to melt, lighting the killer's robe on fire, and he fled with a shriek - but not before fatally stabbing his prey. The murders stopped for a while, then returned more violently than before...as if the killer was taking revenge on the whole town!

Dress as a player from the popular video game this Halloween when you wear an officially licensed Dead by Daylight Scorched Ghost Face Costume for Adults! The shadowy-printed shirt slips on over your head and looks perfect underneath the sleeveless, calf-length tunic. The black tunic has a slashed and jagged hemline and features printed graphics that look like dripping molten metal. Two wide black belts fasten around your waist and are ideal for storing your knives. The oozy-looking Ghost Face mask has an attached hood that covers your whole head, and the black gloves finish the look.

You'll definitely have the scariest costume around this Halloween! You and your friends can dress up as multiple characters from the video game in an epic group theme, or you can go it alone - after all, Ghost Face doesn't need backup!