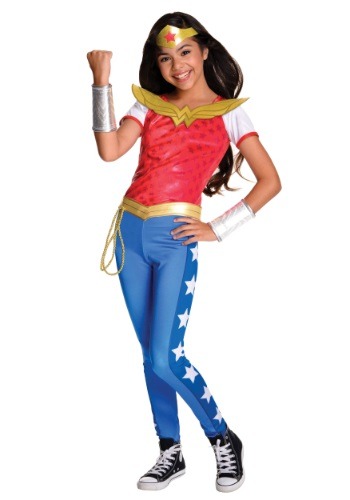 Some girls are just destined for greatness. It's not something that they can simply avoid. Being awesome isn't a choice for those girls and there's no use fighting fate. They're super tough and smart, so we think they're more than ready to kick some bad guy butt. Heck, we think your little girl may even be the stuff of comic book legend!

Of course, the only way you're going to find out if your child has what it takes to be the next Wonder Woman is to get her suited up in this licensed DC comics costume for kids. With this heroic outfit, she'll be ready to stop any criminal in their tracks.

This Deluxe Wonder Woman Costume will help give your girl the attitude it takes to battle it out with the vilest of villains! It has plenty of features that mimic the real DC superhero's outfit, so any evil that threatens the Earth will run for the hills when your kiddo shows up. The red top has the “W” symbols that the hero is known for, while the bottoms have a row of white stars adorning the legs, giving it a signature style that Diana Prince would proudly strut around in herself. Of course, if she's not of Amazonian descent, you may want to teach your child a few super moves before you send her off to join up with the Justice League!

Let your little girl be the hero you know she can be! Give her a confidence boost with this Deluxe Wonder Woman Costume and watch her start saving everyone else's days like she does for yours.