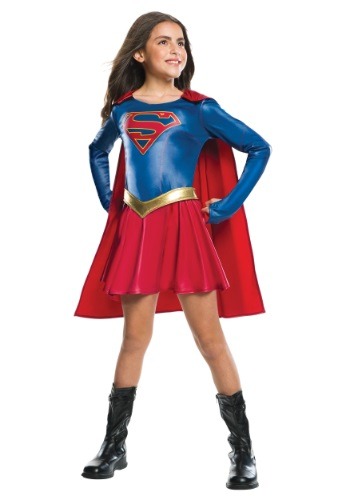 Sometime superheroic deeds come in a small package. Kara Danvers, AKA the girl who later become Supergirl, came to Earth from her homeland of Krypton at the tender age of 13 and the yellow sun's powers super-charged her with a whole bunch of amazing powers. Her parents told her not to use her abilities and let us tell you, we think that's totally lame. We know they were just trying to be protective of their new adopted daughter, but come on! If your little girl had super powers, would you tell her to hide them, or would you tell her to get out there and kick some serious bad guy butt? Our vote goes towards being a totally awesome superhero and we just happen to have the perfect outfit for any “super” girls out there!

Officially licensed from the TV series, this girls Supergirl costume helps give your girl the look she needs to get started in her new career as a Kryptonian hero. Unfortunately, it doesn't grant your child any super powers, but it does have a shiny blue top with an “S” shield that's enough to make any girl feel strong enough to fight against Red Tornado! The red skirt has a smooth satin style and the matching red cape is a must-have for any girl trying to battle against the forces of evil. All of it combines for a look that can turn any girl into the greatest heroine that the world has ever known!

Straight from the hit TV show, this Supergirl costume will transform you into the DC superstar this Halloween. And you don't even need to find a phone booth! We can't claim that you'll suddenly be able to lift your car after putting this costume on, but really, what's more important is that you FEEL like you can lift your car... and this costume could do just that.