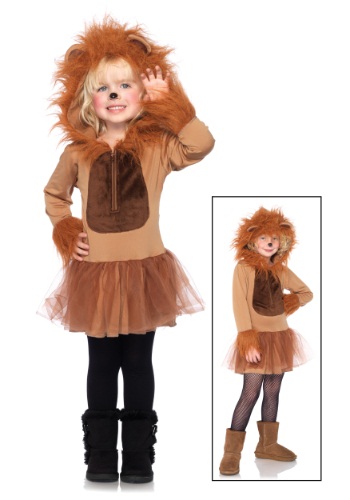 At some point, nature decided that the mighty lion was the king of the jungle. Well, that’s a little silly, since lions mostly live in the middle of the savannah… except for those few Asian forest lions, but we’re pretty sure that nature was talking about the African lion. But, what makes it really silly is the assumption that the lion always needs to be a king. How about the Queen of the jungle… er… Serengeti!?

And who says that either King or Queen need to be full of angry roars? What got into that lion’s fur that is causing such a temper tantrum? The right music, a nice scratch behind the ears, perhaps some well-deserved candy treats and we suspect that we might have a much cuddlier animal kingdom!

That is where your kindly kiddo comes in! With the Child Cuddly Lion costume, your little princess gets to step up and claim her crown and rule the Serengeti with nobility, virtue, and some seriously adorable garb! Start with a long-sleeved hooded dress edged with faux fur and a dark and commanding central chest patch. A ruffled mesh skirt adds to the look to keep the sand from coating too roughly. But, pull up the hood and reveal the perky ears of attention and the royal furry crown! The rest of the animal kingdom will be itching for a hug from this adorable Queen!