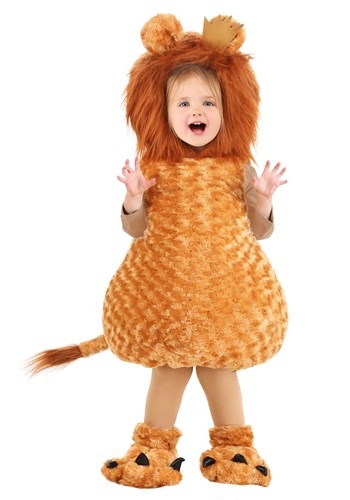 RAWR TO THE KING!

The lord and lady of the jungle are known to be the lion. That's true even though lions don't exactly live in jungles, do they? Well, turns out that the word 'jungle' originally meant something closer to the wilds in general. Anywhere that people aren't in command, really. That makes just a little more sense, don't you think? After all, if you see a lion wandering around, you're most likely going to take off as fast as your legs might carry you!

That's true unless, of course, you're looking at a lion that is as adorable as the cubs can be. These little lions' roars are much more like cute squeaks! Perhaps that's ultimately why we even call them the Kings and Queens of Beasts. They're so adorably cute that we just want to raise them up, claim that mane is definitely a crown, and show them off to the whole wide world. Well, that gives us a royal idea!

Show your little one just how much you think of them when you crown them with this Lion Bubble Costume. This delightful look is Made By Us and designed by the very same tailors who help craft our most popular costumes from the animal kingdom.  Designed as a delightful bubble jumpsuit, it's made with soft minky fabric that features swirling lion-like faux fur and the wide flank to form the perfect bubble. Lion footies and a tail make the look near complete but the hood features a fuzzy mane and soft, rounded ears that ensure your little lion will be able to roar!

READY TO TAKE OVER!?

How often do you feel like your little one is actually the one who is in charge of the household!? Well, that might get a bit stressful, but this Infant and Toddler Lion Bubble Costume will at least make the whole process quite a bit cuter!