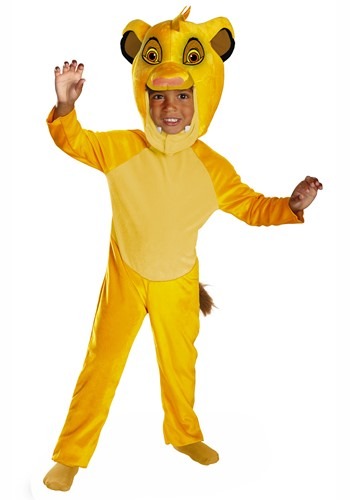 We all know that Simba can't wait to be king. He sang a 3-minute song all about it (much to the annoyance of Zazu). Of course, Simba's not alone in that feeling! Most kids want to become the main event, like no king was before... a ton of kids are out there, working on their roar. (Just to be clear, some kids are working on their roar because they're trying to be a dinosaur when they grow up, but so are young kings to be.)

If your child is ready to be king, then they can jump into the role without any waiting! All you need is this Lion King Toddler Simba costume, which comes from the classic Disney animated film!

Your little king can step into the role of Simba by dressing up in this adorable costume. It's officially licensed from the movie and comes with a soft jumpsuit in the vivid yellow color of young Simba. The suit fits with a fastener in the back, so your little one can slip into the costume with ease. The tail has a faux fur tip and is fully detachable from the suit. The headpiece is made out of matching yellow material and is shaped like Simba's head. It even has embroidered eyes in front to get the look just right! It all comes together for a look that won't have your little one waiting to be king this year!

Stay Away from the Elephant Graveyard!

If your child wants to be king, then it's time to turn them into Simba! This Lion King costume will have your child ready to take on the role in no time. Just make sure to teach them about the dangers of Elephant Graveyards, since playing around in one of those is always a bad idea... even for a king!