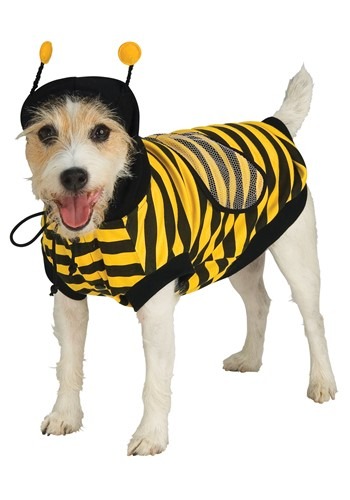 You watched as your pup played in a flowerbed. You knew they were going to need a bath and probably a good check for any stickers and bugs, but they looked so happy you let them enjoy their little tumble. But, with a squeal, they came sprinting at you. It didn’t take long to figure out what had happened. Their muzzle was already swelling. The vet told you, your pup had tried to eat a bee. The swelling would go down since they were able to remove the stinger and your pup would go back to normal in no time.

Only, after the swelling went down, they didn’t go back to normal. In fact, they started exhibiting some very different behaviors. You assumed they would be wary of any flowering plant, but they were more drawn to them than ever. Whenever you took them to the dog park they would sit in the furthest corner and bark until the rest of the dogs congregated around them. The strangest thing of all though… your dog started making humming noises instead of barks. It clicked when you saw them brush against one tulip and then shake their fur next to another. Your pup had become a bee.

There’s not much else you can do but get your pup ready to lead the life of a bee. The world needs a few more anyway, and since your pup is so nice at least we know this pollinator won’t spook anyone it buzzes past. Especially in this Bumble Bee Dog Costume. Your pup will look as sweet as honey in the bright yellow and black striped bodysuit. The attached hood features antenna to really help them blend in with the other worker bees. And with their own set of transparent wings, they’ll be ready to fly from hive to hive and flower to flower.

We can’t really think of a better costume for a dog. They love the outdoors, they have tons of energy, and unless threatened their bark is way worse than their bite… or sting, we guess. In this Bumble Bee Dog Costume, your pup will be ready to show the world just how sweet life is with bees.