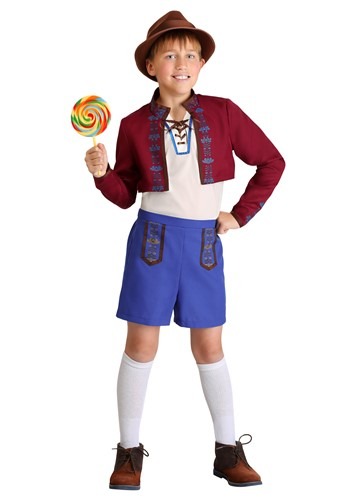 Is there a more applicable Halloween costume than the Boy's Hansel Costume? We don't think so and we're prepared to explain. First of all, the Hansel character is a candy-collecting fiend. He's ruthless when it comes to sweets. In the pursuit of sugary goodness, he'll knock on any door—even a witch's door if there's a slight chance it could result in candy. Hansel, you cray, but at the same time, we get it. With a rumbling tummy and a pulsating sweet tooth, that boy is prepared to do some silly things for the sake of sweets. For instance, Hansel is ready to crawl into an oven. Not the greatest idea, Hansel! Walking into a stranger's home is dicey then army-crawling on your elbows and knees straight into a soot-covered oven? Nuh-uh Hansel, not smart. He could really use your brainpower and common sense.

Wear the boy's Hansel costume but make smart choices. Collect all the candy you can get your two hands without going into stranger's homes. Snag all those sweets but avoid ovens, no matter how good it smells in there. We know a smart boy like you will make wise choices.

The boy's Hansel Costume is an exclusive Made by Us design meaning it's crafted from high-quality fabric so it's made to last. The shirt features a lace-up embellishment and gets topped off by a long-sleeve bolero-style jacket. The matching shorts have an elastic band in the waist so they're comfortable to wear and easy to get on and off. Finally, the brown hat completes the storybook-themed costume. Just stay away from sketchy houses and your Halloween will end happily.

Hansel didn't venture out alone and neither should you. Collect as much candy as possible with a friend who's dressed as Gretel!