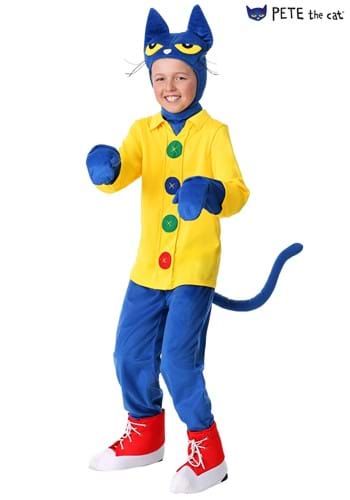 STEP ONE:  BUTTONS AND SHOES!

Is your little one going on about a "groovy cat" lately? You might be wondering where he learned that phrase. After all, it isn't something the kids say these days. Sure, everybody wants to be a groovy cat... at least they did back on the dance floors of the 1970s. But, don't worry. Your tyke hasn't become obsessed with John Travolta in his crazy white suit and isn't about to start singing in frightening pitches about staying alive.

But, there will be singing. It's just going to be about awesome buttons and colorful shoes! That's because Pete the Cat is around and he's overflowing with optimism about everything going on in his life. Whether he's showing off his fancy buttons or strutting his stuff with his favorite shoes, this cat knows where it's at! And, who can resist singing along with his simple, happy songs?

Give your child something to really sing about with this officially licensed Pete the Cat Costume. Our own team of designers put this look together, because we just can't get enough of any cat that's graced the Internet, and Pete is no exception. Our Kid's Pete the Cat Costume includes a long-sleeved, yellow shirt with four giant faux buttons and a fuzzy, blue mock neck. The pants are the same blue fabric and feature a curly tail. Finish off this purr-fect look with blue cat mittens and strawberry-red boot covers and it'll be time for the next tale!

WATCH OUT FOR THOSE CUPCAKES...

Once your little one is all geared up as adorable, easy-going cat, they'll obviously be needing a cupcake party, next!  Of course, that just means that you get to play the part of Grumpy Frog and get a few extra ones for yourself! Groovy, right?