How Can I Tell the Difference Between Inexpensive and Expensive Costumes? 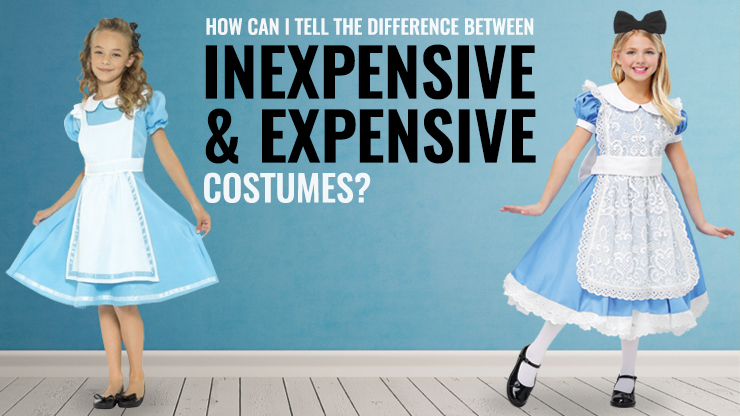 Have you ever wondered why some costumes are more expensive than others? Sometimes there can be a variety of price points within a costume category. For example, one pirate costume is only $19.99, but this other pirate costume is $39.99, while yet another is $89.99! A lot of the pricing comes down to a difference between materials, the number of accessories and other amenities like zippers and pockets. We're going to explain this in greater detail by doing a few side-by-side comparisons of popular Halloween costumes so that you can have a better idea of what to expect when you see costumes listed as deluxe, authentic and supreme. Please note that the prices mentioned may change, but we're using them as a grounds for comparison so that you know what you might expect at similar prices. 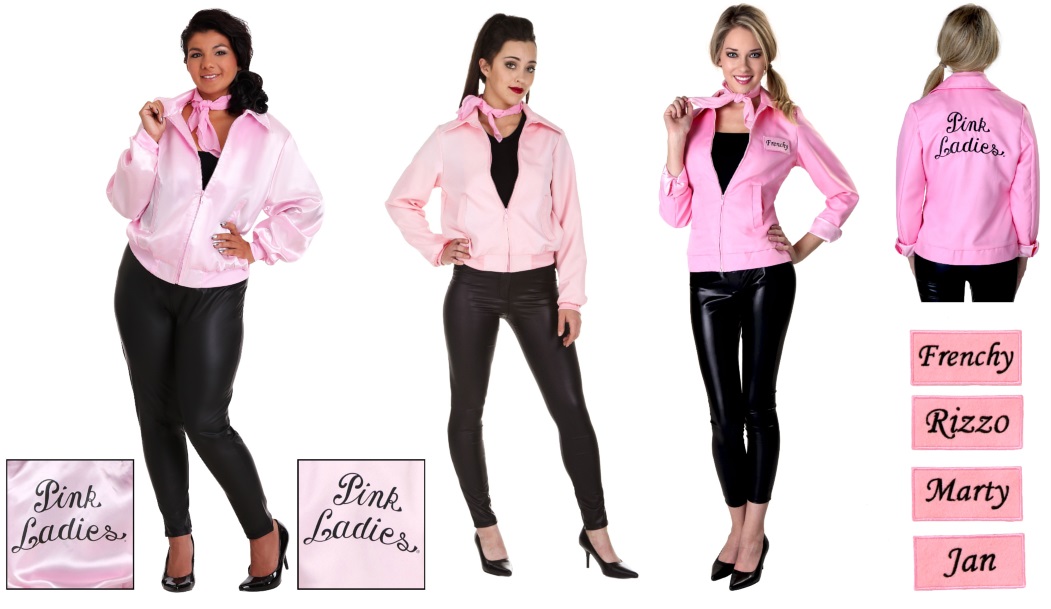 Just by looking at the photos of these three Pink Ladies jackets, you can tell that they're all slightly different. However, if you have ever gone shopping online, you know that you shouldn't buy something simply by looking at the image. (Just take a look at some of these serious shopping fails!) Now, you're not going to get any doll-sized costumes here because we sell costumes for humans and pets, but it's still very important to check out the list of included items and product features. (It's also important to look at the size chart, but that doesn't really affect the price.)

The jacket on the left is a plus-sized basic Pink Ladies jacket for $29.99, and it comes with the jacket and a pink scarf. You might also notice that plus-sized costume costs a little more than the costume sizes in the regular range, which is simply due to using more fabric to make the costume. It is made of a lightweight, shiny satin-like polyester fabric and the jacket pockets are only there for looks. The "Pink Ladies" logo is also printed on the back of the jacket instead of being embroidered. (Embroidery will always make costumes more expensive!)

The middle costume is a deluxe Pink Ladies jacket for $34.99 and it's still just the jacket with a printed logo, fake pockets and a neck scarf. The jacket is also made of polyester, but the fabric is a little heavier and it's matte, not shiny, which makes it a little closer to the appearance of the jackets in Grease. The last jacket on the right is the authentic version, and it includes the jacket, scarf and four interchangeable name tags. It is priced at $64.99, but the jacket is made of twill fabric with a satin lining and it has real pockets! Unlike the printed logos on the other two jackets, the authentic costume has embroidery on the back as well as on the name tags that attach to the front of the costume jacket with hook and loop.

No Gemino Curse Here—These are All Different Harry Potter Costumes

The world of Harry Potter is huge, and so is the selection of Harry Potter costumes. For ease of comparison, we're taking a selection of Gryffindor robes, but we do also have Harry Potter robes for the other three houses. (If you're wondering why there are five costumes pictured, The last two images are the same costume. We just wanted to show you the items that were mostly hidden by the robe.) The first Harry Potter costume is a basic robe with a separate robe clasp for $24.99. Only the inside of the hood has a red lining, and the polyester fabric is very lightweight. Also, the Gryffindor crest on the front of the robe has been printed on the fabric. The second Harry Potter Halloween costume is fairly similar to the first, but you can see that the hood and the cloak edges have a scarlet lining. It is still made out of polyester, although the material used for this costume is thicker and almost fleece-like, and it sells for $34.99.

Once we get to the third costume robe, it is listed as an "authentic" costume, and it is priced at $44.99. It still has a clasp, but it has a red lining for the entire inside of the cloak and the Hogwarts crest on this costume is embroidered. It is also entirely made of polyester, although the fabric looks and feels like a velveteen fabric, so it's a little shiny and it has a fuzzy texture. You might have noticed by now that many costumes, especially the less expensive versions, are made of polyester. (Material cost is a big part of costume pricing!) Also, you might have noticed that we described polyester as a few types of fabric from thin and satin-like to fleece-like and velveteen, and honestly you can make a wide range of polyester fabrics to feel like just about anything. (If we piqued your thirst for knowledge, you can read more about polyester fabric here.)

The fourth and final Harry Potter costume is made by a different manufacturer than the first three, so their naming conventions are a little different. It is called a "deluxe" costume, although it could easily pass for an authentic or supreme version. We included two images of the last costume because, unlike the rest of the costumes listed, it's more than just a robe and a clasp. The robe, sweater, dickey (also known as a shirt front) and necktie are all included as part of the costume! The robe and sweater both have embroidered Gryffindor patches, which is just plain awesome. It's twenty bucks more than the previous robe at $64.99, but you're getting a lot of other pieces that you won't need to buy separately. If you have a pair of black pants and some black shoes, you're basically good to go! 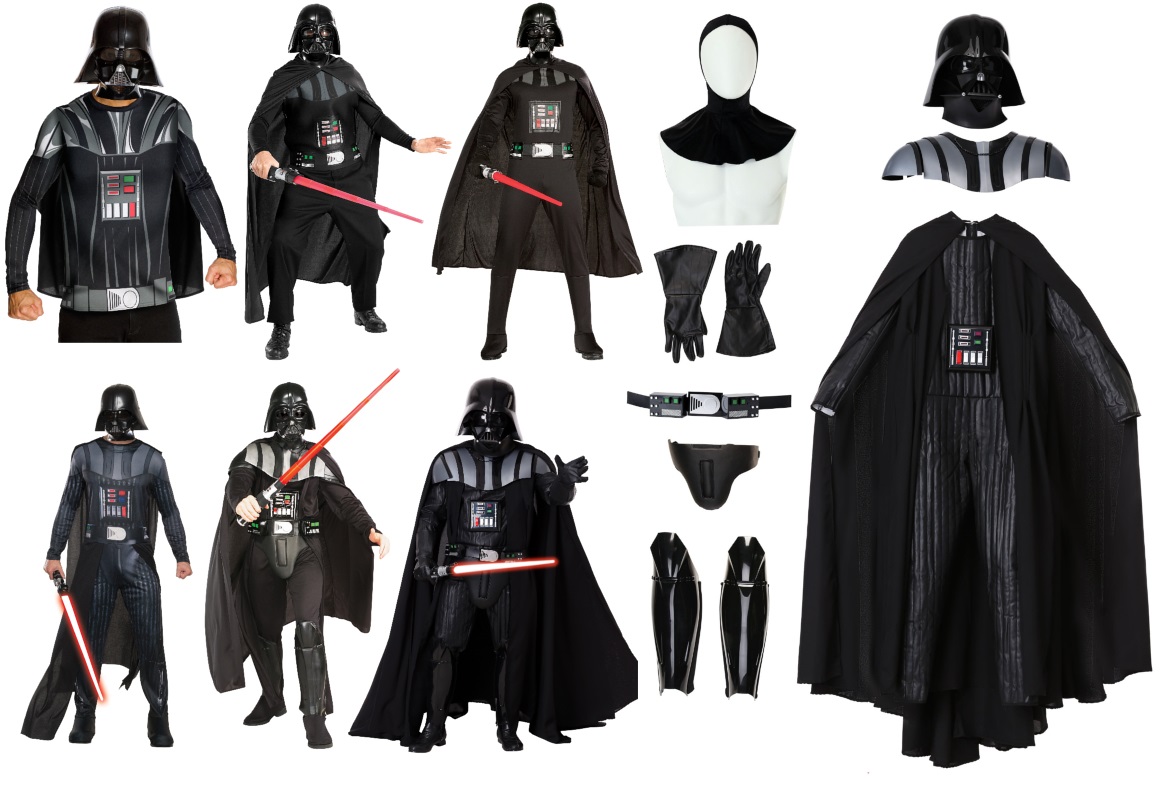 As popular as Harry Potter is, Star Wars is another huge movie franchise, so there are also a bazillion and a half costumes. (Please don't ask us to quantify that!) You might be wondering why there are six Darth Vader costumes at different price points, so we're going to break it all down for you. When it comes to design, Darth Vader is more complicated than others, so his costumes are more expensive as a rule of thumb. The first costume in the top left corner is a simple caped graphic t-shirt with a plastic half-mask for $24.99. If you're on a tight budget and you're fine with looking like the character without going all-in, this is the costume for you! Likewise, the economy Vader costume is another budget costume for $34.99. It includes a half-mask, a black cape that ties around the neck and a printed foam chest piece with ties on the sides that you would then tie in the back. You're going to need to supply your own black long-sleeved shirt and pants to complete the desired look.

Once we get to the third costume in the bunch, we're getting more of a complete costume. It's a basic jumpsuit with printed details, a cape, a printed tie-on belt and a half-mask for $44.99. You might be wondering why it seems so expensive for such a basic costume, but a full jumpsuit and long cape use a lot of fabric, which drives up the material costs. Costumes of licensed characters also tend to be more expensive as well, because you're paying the property owner for permission to make costumes of their intellectual property. The fourth costume is very similar to the third one because it's a jumpsuit with a hook-and-loop closure that includes a cape and half-mask, but the entire jumpsuit has printed graphics on the front and the back. The full print job drives the price of this costume up a little to $49.99.

Once we get to the deluxe costume, we're getting a lot more costume pieces. For $79.99, you're getting a jumpsuit with an attached foam collar, an attached chest piece and foam shin guards along with some rubber parts, a cape, a rubber and hook-and-loop belt plus a plastic half-mask. Darth Vader's design is a lot more involved, so with the additional pieces to look more authentic, that's also going to make it much more expensive. Finally, you're going to get to the authentic Darth Vader costume. We actually included the costume pieces in the top image for you because you're getting quite a few of them—as you should for $699.99-$899.99! The full helmet, shin guards and shoulder armor bits are all made of molded plastic, and the belt also has plastic boxes that light up with batteries. The chest piece on the jumpsuit is also plastic and will light up with some batteries as well. As for the fabric costume pieces, they're all made of thicker, more durable fabrics and the jumpsuit is even quilted for a move movie-accurate appearance. It also has a zipper instead of hook-and-loop strips to hold the costume together.

Look at These Alice Costumes for Girls

The character Alice from Alice's Adventures in Wonderland is extremely popular and as a result, it sells a lot of costumes every year. Characters like Alice and Dorothy from The Wizard of Oz are such popular sellers that manufacturers are willing to make them a little nicer at a lower profit margin because they know they're also going to sell more of them than other costumes. The first Alice costume is the least expensive option at $29.99. The dress is made of lightweight polyester fabric, and the apron comes attached to the dress. (If you check out the back view, you can see that the apron ties aren't there because they stop at the side seams.) It also includes a black bow headpiece, and the dress actually has a zipper! (Many costumes at $30 and below just use hook and loop, so this is a nice feature for the price.) The next dress is actually a poly-cotton mixture, which gives it a little more weight and makes it look and feel like clothing. The apron and black hair ribbon are both separate from the dress, which also closes with a zipper. This costume is sold for $39.99.

Dress number three is made of heavier polyester fabric and it includes a zipper as well, but the dress and apron have extra lace embellishments that make the dress a little bit pricier at $44.99. It still has the same three pieces as the previous costume (dress, apron and bow), although they're a little fancier. If you look at the last costume, you can tell that it has all the bells and whistles, and even more lace. It also comes with a few more pieces, including the dress, bow headband, apron, sash and a separate petticoat. Not surprisingly, this is the most expensive Alice costume at $49.99-$59.99.

We hope you learned a few things! It definitely boils down to "you get what you pay for", but it's always good to take the time to compare your options in detail. Do you prefer to wear less expensive costumes, or are you willing to buy the more expensive costumes so that your costume can be worn multiple times? Are there any other pressing costume-related questions that you would like to learn about? Let us know in the comments below! We love your input and we're glad to help you find the perfect costume.