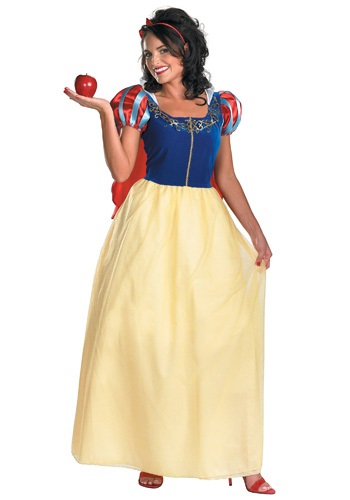 Remember, you're the one

Who can fill the world with sunshine

Snow White and the Seven Dwarfs was Disney’s first animated feature film, a technical masterpiece, and is still considered among the greatest movies ever made to this day. Adjusted for inflation, it is still the highest-grossing animated film of all time. There was truly nothing like it before.

Snow White’s story is one we can all relate to: a young woman runs away into the woods to live with very short jewel miners, does housework with the aid of wild animals, eats poison fruit, sleeps in for a year, and finally gets kissed by a member of the royal family. Well, maybe it’s not so relatable when we put it that way, but Snow White’s charm is irrefutably timeless. And now you can steal her look!

Our Adult Snow White Costume comes with the titular princess’ dress, red cape, and signature headband. We made it with high quality materials, because no princess would be caught dead (unless a certain wicked queen had her way) in anything less. The colors on the puffy sleeves really pop, just like the movie’s beautiful colors. Now all you need is an apple and a pair of red shoes and you’re a princess! (Just don’t lose one of your shoes, that’s the wrong picture.)