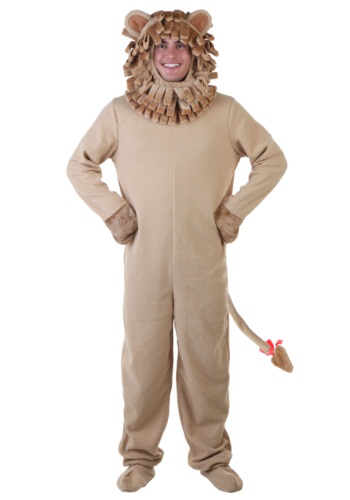 Need to look ferocious, but not so ferocious that you scare away all of the other critters? That can be tricky to pull off, but we'd be “lion” if we said we didn't have the perfect costume for the job. Wear our exclusive Lion Costume when you want to look as fearsome as a legendary predator, but still soft enough to cuddle up with!

Once you are dressed up as this noble feline, though, that is when the real challenge begins. They are called the “King of the Jungle” after all, which is not a title that just gets casually tossed about. It's entirely possible that when you show up to a party dressed as a lion, anyone else in an animal costume will naturally be drawn to your kingly fashion, and start looking to you for leadership. And if there are other folks wearing lion outfits at the same gathering, they might challenge your authority, resulting in lots of competition to figure out which of you lions is the most worthy of being king. In the wild, we imagine lions do this by seeing who can roar the loudest and eat the most antelopes, but if you don't have any of those at your party, just use chicken wings instead.

Like we said, though, this is just one possibility of what wearing this costume could result in. It's just as likely that you'll arrive to the party in this cozy, fleecy jumpsuit, and the other lions won't try to dethrone you. But our costume will make sure you come out on top if they do, especially if you practice your fierce kingly roar!