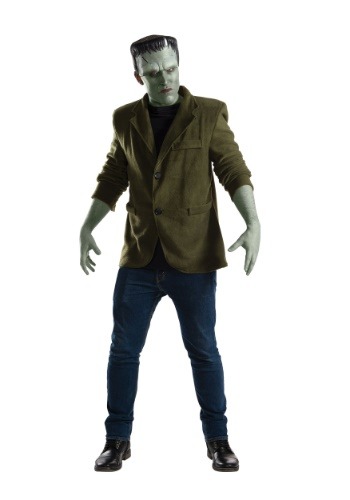 Monster With a Heart of Gold

Misunderstood, misrepresented, and mislead; poor Frankenstein's monster never even had a chance! Frankenstein, the mad scientist was a man with a lot of ambition. He didn't think what life would be like for a ghastly green jigsaw puzzle of a man would be like. If he had thought about his creation's emotions maybe he would have let his monster loose in a big city rather than a tiny village, people are more excepting of undead differences in urban areas. If that had happened, we're pretty sure that he would have been a pretty successful guy. Look how suave he can be when he changes out of a ragged t-shirt and moldy black pants. Plus, we don't see why he had to wear his bolts once that lightning strike brought him to life!

This Frankenstein is less freaky and more dapper. With a square hairline, green skin, and heavy brow, you'll be instantly recognizable. He's ready to appear at the Monster Mash in a green blazer with pockets and two buttons. Pair it with a pair of black pants or jeans and you'll be ready to stroll on out of the lab!

One of the biggest tragedies that go with Frankenstein's monster is his loneliness. He's the only one of his kind. But he doesn't have to be when you dress up as him for Halloween. Pair up with the lovely Bride of Frankenstein or the Dog of Frankenstein. Or hey, we're pretty sure that he would have a great time with mummies, vampires, or even a werewolf or two. Because the thing is, freaky friends will always be better than no friends. And you know that once monsters get together, things can get pretty wild. This might finally be Frankenstein's best Halloween yet!