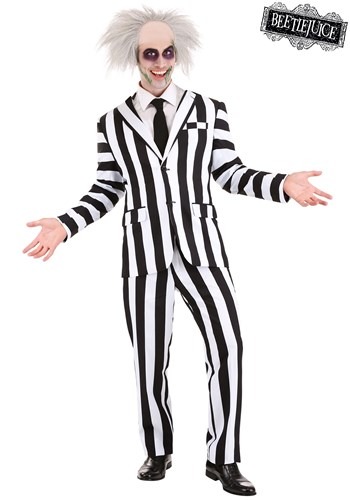 The Biggest Show Ever!

Some say that the afterlife is a bit of a drag. You know all of that black, white, and grayscale overtones? They can make the world seem pretty dreary. Some rooms of the waiting area of the Hereafter seem actively designed to make people bored. (Even the ghosts with wounds are fairly apathetic to the wait!) We probably should have guessed that is how it was going to be when there was a massive handbook filled with rules and expectations for the Recently Deceased.

Phew, no wonder Beetlejuice has had it up to his frazzled hair with the afterlife! At least Beetlejuice managed to make a fun little world of his own. Between sunning himself in the green fields of the model city and making quite the unexpected friendship with Lydia Deetz, Beetlejuice is always ready to bring a little extra color to the world. And... it seems that someone has muttered a certain name several times. Well, it's time to deal with what we've unleashed!

Bring your favorite ghost to life in a big way with this officially licensed Beetlejuice costume. This is a Made by Us design that brings the boldest and best black and white stripes together in a two-piece suit that will make everyone think of the cult classic movie in a snap. Now, we can't promise that you'll actually get any supernatural abilities once you are geared up in this highly-recognized look of Showtime Beetlejuice, but we're pretty sure that you're going to feel as inspired and mischevious as the Ghost with the Most is known for!

When it is time for the paranormal, why go with a ghost that's typical? Bring the creepy fun and ghostly mostliness with this Beetlejuice Suit! Just watch out for folks saying your name three times again.