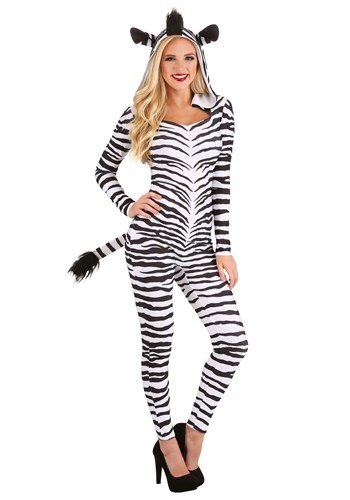 A Horse of a Different Pattern

There are several theories about why zebras have stripes. A lot of those theories center around protection from flies and predators. We can see how that would work. Just like black and white patterned clothes can look like they're in motion when you stare too long, a herd of zebra hanging out could create the same visual effect. As much as we enjoy the idea of the stripes being useful for maintaining cooler body temperatures (because it sounds like magic) it's a harder theory to wrap our minds around. To be quite honest, our favorite stripes theory suggests they are there to help zebras recognize one from another.

Just like every human has unique fingerprints, a zebra's stripes never match another zebra. It only makes sense then that those varied striped-patterns are for distinguishing one zebra from its look-alikes. So in the spirit of individuality, we decided to it was time to offer another zebra costume option.

Slip into your own zebra stripes with our exclusive Women's Zebra Costume. This Made By Us costume was designed with zebra-print spandex for a snug fit, almost like wearing a second skin. Without a zipper or buttons, there is nothing to break the illusion that you have become a wild zebra. The attached hood lets you throw on your tufty, black mane, and rounded ears with ease. And of course, the look wouldn't be complete without a tail, which you'll find attached at the back of the suit.

A group costume might seem counter-intuitive when it comes to dressing as zebras, at least after everything we've shared with you. But keep two things in mind. First, you and your cohort can choose from more than one fabulous zebra costume. And second, zebras travel in herds sometimes called dazzles. In one of our Zebra Costumes, you and your dazzle are sure to look dazzling.