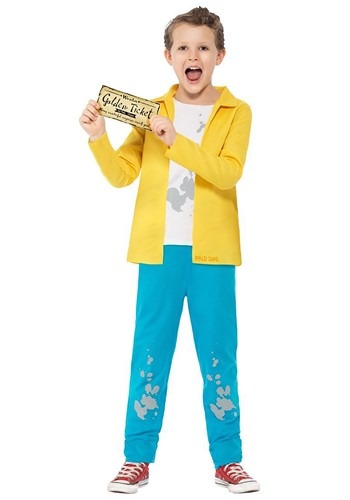 Who's Story Is This?

There are two beloved movie adaptations of the popular story Willy Wonka and the Chocolate Factory. One was released in 1971 and starred Gene Wilder as Willy. The other was made in 2005 and starred Johnny Depp. Both movies had pretty big stars to play Willy Wonka, but is this story just about him? Of course not! This is also the story of Charlie Bucket. The young man had no idea what was in store for him when he decided to buy a chocolate bar. Let your child pretend to get their golden ticket in this Willy Wonka Tween Charlie Bucket Costume.

This costume is not based off of either movie! Instead, it draws inspiration from the book, which had hand drawn illustrations in its pages. The yellow jacket and underlying t-shirt are actually a single piece that can be pulled on over the head. The bright blue pants are made of fleece, so if Halloween is a bit chilly where you live, these will be perfect. And of course, the most important part of this costume is the golden ticket. This one shimmers with gold, and features words from Willy Wonka in black letters. Just add a pair of shoes, and Charlie is ready to tour the factory!

While this story talks a lot about chocolate, sugar, and many other kinds of candy, the story is about more than getting a sweet treat. It's a tale about people, and what selfishness, pride, and greed can do to people who let those feelings run their lives. We cheer for Charlie Bucket because he is humble and good, not because he has money or power. And those admirable qualities are why he will make a great owner of Willy Wonka's Chocolate Factory.