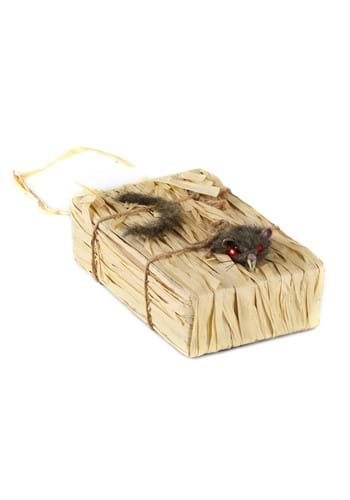 Rats and humans have always had a mildly contentious history. For a while, we were unenthusiastic roomies until the Middle Age happened and it turned out that the furry housemates carried plague fleas, which is far worse than a housemate who leaves dirty dishes in the sink. The rats were mostly evicted, but now they're back for Halloween!

If you want a spooky decoration that isn't your run-of-the-mill chained ghost, then this exclusive Walking Light Up Animated Haystack Rat Halloween Decoration is for you! A sturdy plastic box is covered in raffia "straw" and decorated with a faux fur rat head and a poseable faux fur rat tail. when activated, the hay bale moves across the floor, the rat's red plastic eyes glow, and the decoration plays a snippet of Grieg's "In the Hall of the Mountain King."

If you saw a real rat behave like this, you'd probably speed-dial an exterminator. Fortunately, this decoration is both harmless and hilarious (and a little horrifying, too). It's happy to hang out on your porch or in your home, playing its song and startling guests. It also promises not to spread the plague. You're welcom.