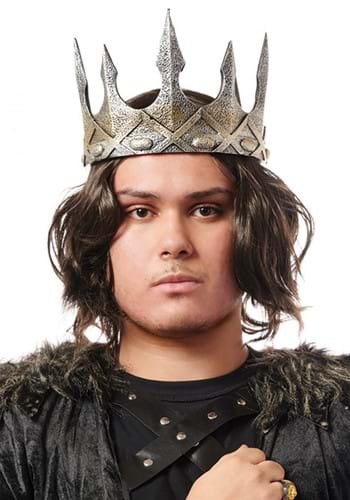 No! Crowns make the man. This crown, in fact, makes you into a Viking King. Or Jarl. Or Chief. Or whatever the rest of your costume says about you. Hmm… ok, we admit that clothes influence the initial impression of the man somewhat, but nonetheless, we maintain that crowns are also very powerful in terms of first impressions. So there.

Besides, who ever heard of someone taking control of vast armies without a crown? Well, we suppose the President of the United States doesn’t wear one… or any generals… Ok, we admit that that was another bad example, but nonetheless! We adamantly oppose the idea of allowing costumes to remain incomplete. It’s just not right.

One of the best features of a crown is that it implies that you’re either fabulously wealthy or immensely powerful. Whichever it may be in reality, you will certainly be the target of many curious courtiers wondering whether you have hordes of terrifying pillagers, or hoards of tantalizing coin.

Here’s another thing people will say! Get it?! Viking?? Liking?? Well, in our office poll at Halloweencostumes.com, 3 out of 100 people thought that this was a funny pun (yes, it was us).