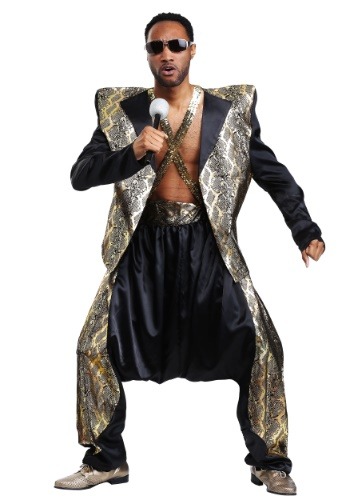 You’re going to show the world what’s in your soul. You’re going to bust rhymes, right on time, like they wouldn’t believe. When you shimmy across the stage, they’ll know that you’re way too legit to quit. When you wear this 90s inspired pop star costume, they’ll see that shiny pants are a fashion that never dies.

If you can provide the mic skills and the dance moves, then we can help you out with the outfit. This Pop Star costume is a plus size outfit that will have you ready to bust a move on the stage you see. It comes with a black jacket with some sick shoulder pads and plenty of glimmering gold accents. The pants have an elastic band for fitting and feature the same glimmering gold accents on the fronts. Finally, the gold suspenders help tie the whole outfit together! Pair it up with your best pair of shoes and your favorite pair of sunglasses to really step into the role of a 90s rap legend.

They might not get you. They might try to crush your dreams, but you’re stronger than that! Just put this plus size Pop Star costume on, grab the mic and get ready to show the world your signature shimmy dance. Prove all of the haters wrong!