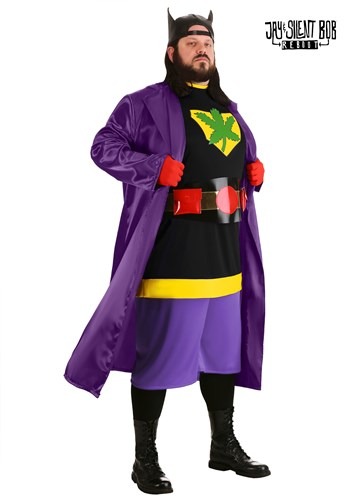 It Isn't What You Think

Who is that costumed man that dwells within the hidden cave lair with his lifelong companion? He has countless gadgets that help him bring low the villains that swarm and attack the city, though none know where all of this mysterious technology comes from. His dark garb, contrasted by brilliant yellow—does it strike fear into the hearts of those who look upon it!? Well... maybe if it were the character that most would assume. But, when the B-man is Bluntman... huh?

All right, so maybe this noble superhero isn't quite as well known as some other quasi-caped crusaders. In fact, a wealth of research into the identity of Bluntman might only reveal a rather short run of adventures. Who can blame him, though? This is an everyday kind of superhero. One that truly represents the goal that so many possess—especially those who keep the View Askewniverse near and dear to their hearts: pure and unbridled relaxation.

Bring the enigmatic and strangely silent superhero from the View Askewniverse's comic world to life with this officially licensed Bluntman costume. This is a complete ensemble that will transform you into Keven Smith's portion of the green-loving Doobage Duo. It was fashioned in our own in-house design studio and includes a printed shirt, shiny utility belt, black leggings, purple shorts, red fighting gloves, and a long purple coat. Top the look off with a heroic-style backward hat and all you'll need is to find your Chronic... (the character, of course).

Time for Another Story

We can't really get enough of the mysterious hero, Bluntman, so unless studios are ever successful in bringing a film to light, it is up to you to create brand new tales. Flourish your cape-like coat and become the hero we're all craving.