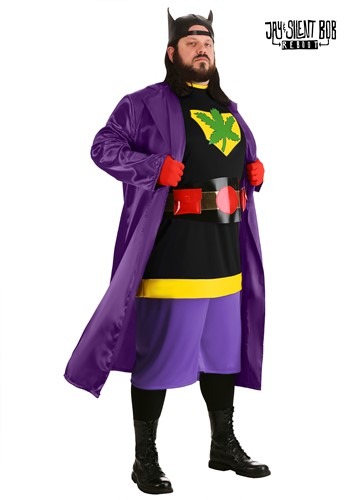 The View Askewniverse offers up some pretty amazing stories, we like to think. But, nothing really compares to the strange kind of meta-story that is created by watching the truly amazing duo that is Kevin Smith and Jason Mewes. The two gave birth to iconic characters! The perfect combination of insane id of Jay's instinct and the quiet moral center of Silent Bob's super-ego. Can't get enough! Why wouldn't these two platonic life-partners also become superheroes!?

Of course, evil is always waiting to appear. We're not exactly sure what kind of evil that's actually supposed to be, though. We know that the League of—is that what they're named!?—exist and show up to cause trouble to the two... but when most of them vanish in a mere accident, we're pretty much left with waiting to see what Bluntman will do next. Clearly, it is time to strike out and find the only thing that completes this noble hero: his best friend, Chronic!

With only three trade comics and the hint of a couple movies, clearly we need more of the genuine hero. That's why our Made by Us design team wants to offer this officially licensed Bluntman costume for your enjoyment. It is a complete ensemble that includes everything you need to transform. From bottom-up, you have a pair of black leggings, purple shorts, a printed shirt, and a flashy utility belt. Wear the red gloves and the heroic hat (worn in Silent Bob's iconic style) and then flourish your dark purple cape-like coat. All together, you're ready for adventure!