Pirate of The Crib-Ian Infant Costume 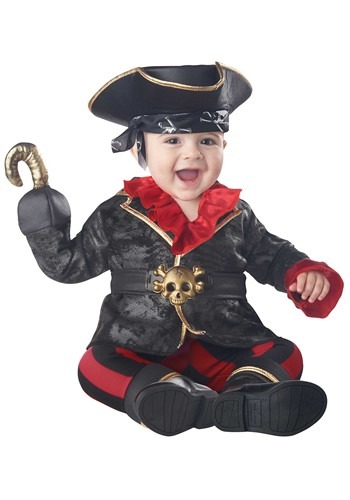 The toy chest is filled with a lot more than toys. You’ve found the spare keys to the car and a locket that went missing from the bathroom counter. When you decided to organize the mess once, you found $2.54 in coins at the bottom and 3 stale crackers. A music box from your grandfather found its way to the chest at some point. Until you found that one, a few tinkling notes could be heard whenever your little one reached for another plaything.

For a while, you thought maybe, just possibly, you had some role in filling the chest with the odd items. Or that someone else in the house was playing tricks on you. But you decided to check in on your little one as they napped in their crib. You were only slightly surprised when you saw they had a half sleeve of graham crackers and a shiny penny resting next to them and their favorite parrot plush.

Well, if they’re going to sneak snacks and family heirlooms, they might as well look ready for the pirate life. This Pirate of the Crib-Ian Costume will turn your charming babe into a regular scallywag. This jumpsuit will make wearing a fine-detailed doublet, befitting a fearsome pirate captain, and striped trousers with wide cuffs as easy as wearing an everyday onesie. With a bandana attached to the tri-cornered hat, your little pirate’s face won’t ever be covered in sweat betraying their fear of parental capture.

A pirate’s life may not be for everyone, but a pirate’s life has chosen your little rascal. In this infant’s pirate costume, they’ll enjoy their playtime voyages and candy pilfering until the tides come in. When they run the ship aground for the night remember the day’s plunder is probably buried in their toy chest.