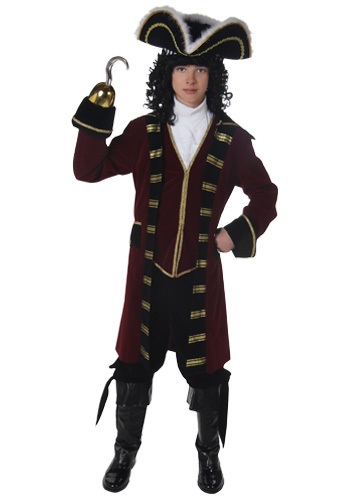 Filled with exotic and quizzical creatures, like mermaids—which we’re pretty sure would look amazing if they got sprinkled with some fairy dust and took to flight—Neverland is a place that never gets old, literally. Neverland is a magical place where time doesn’t quite move forward. It is here that Peter Pan and his Lost Boy friends can remain children for all their lives, even bringing a few friends to avoid some aging for a while. We’ve all had some serious fascinations about heading out to visit the place, though our own supply of fairy dust is rationed exclusively for costume designs.Sigh.

Here’s the thing, though. Peter Pan is always calling Captain Hook an old man. It’s something that we always assumed must be true. The hook-handed captain must be well into his 60s or later. That explains why he’s always so afraid of the ticking clock. It isn’t just the fact that a crocodile is after him. After all, the captain has surely dealt with scarier things in his long years on the vast seas. He did sail to Neverland! It reminds him of his ever-aging closer to his own demise! But… then we got to thinking: he’s not aging in Neverland, either! And, how old is Peter, anyway, that he’s calling someone old? We realized that Captain Hook might just seem old to the youthful prankster. Hook might be pretty young, in fact, with those beautiful black locks not even showing the first sign of graying!

So, it’s the perfect time to let you youngster try to fly the skull and crossbone flag in Neverland with this Teen Captain Hook costume. This elaborate black pirate jacket has the sinfully luxurious feel of rich velvet and sports gold trim details that not only contrast beautifully with the black but show the wealth of the pirate’s hoard. Enjoy a night spreading disharmony among the rude Lost Boys of Neverland and pillage the county for your rightful share of prizes. Just be sure to get back to Neverland before your own clock starts ticking!