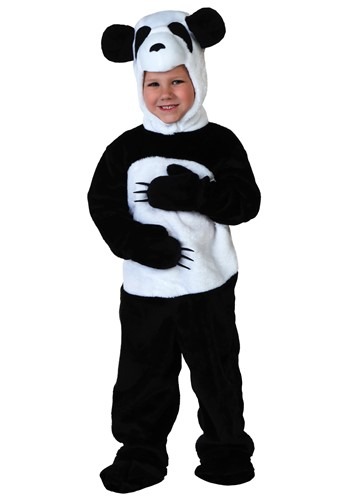 Before advances in genetics, scientists used to argue about whether the Giant Panda was a true bear, or whether it was more closely related to some kind of other creature, like a cat or a raccoon. These guys are tough to classify because they're big enough to be really ferocious, but they also get such a high amount of their nutrition from bamboo: not exactly standard bear fare! It isn't worth splitting hairs, though, since the panda has always been instantly recognizable as an iconic emblem of its Chinese homeland and our planet's wonderful biodiversity.

So in our Panda Toddler Costume, we really tried to capture the essence of these rare, adorable, and frankly kind of strange animals. We gave it a hood with the mysterious black ears and eye-patches that make the panda seem personable at some moments, and at other moments vaguely ghost-like. We gave it the cuddly white belly that seems made for tummy rubs, but we also gave it the sharp claws that say keep your distance, human!

If your child feels like lazing around with their pals, stuffing themselves full of shoots and leaves, this costume will put them in the right state of mind. And if your child feels more like reminding people that pandas are still capable of acting like their more fearsome bear cousins, this suit will look plenty scary with its paws up and some prominently-displayed bare teeth! Add some white face paint to complete your child's disguise, or do without it if you want to preserve their natural cuteness!