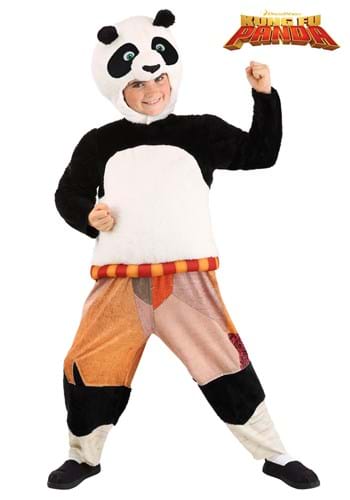 Dare to be the Dragon Warrior!

Heroes come in all shapes and sizes. Just because somebody doesn't look particularly heroic... or brave... or smart... or even capable of basic tasks like tying his shoes... doesn't mean he isn't a true hero inside!

Po knows this better than anyone! No one took him seriously when he was first declared to be the Dragon Warrior. He didn't know nearly as much about karate as the rest of the famous Furious Five, and it took quite a while for them to warm up to him and accept him as one of their own. But through hard work, determination and his unfailing cheerful spirit, Po was able to become part of the warrior group and take his place as defender of his village. (Finally managing to obtain the famous Dragon Scroll also helped his case!)

Bring back balance to karate and protect the innocent in this Kung Fu Panda Child Po Costume. This exclusive, officially licensed costume is made of 100 percent polyester faux fur and jersey knit fabrics, and it looks just like Po! The jumpsuit has a hook-and-loop fastener at the center back, as well as a fiberfill-stuffed roll at the waist. (We figured it'd take too long for you to eat enough dumplings to get a real roll!) There's a stuffed tail sewn to the back of the suit, along with a hood that has a faux fur outer shell and foam-backed jersey lining, with stuffing between the shell and lining for shape. The hood also has a stuffed nose and ears, as well as embroidered eyes.

The Power of Awesome!

With this Po costume, you'll be ready for anything that's thrown your way in your daily Dragon Warrior duties. Fighting off an evil snow leopard? It'll be a walk in the park. Protecting the village from a crazy peacock? You've got this. Squaring off against a raging bull? No problem! Just another day in the life of the Dragon Warrior!