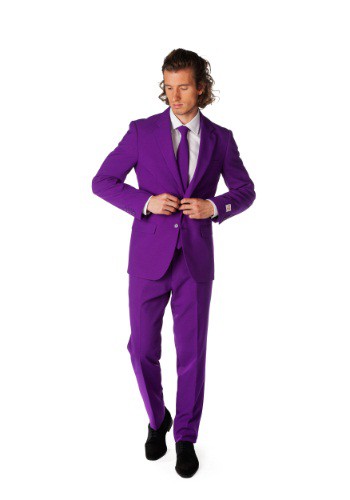 Listen, it’s not exactly a secret that it takes a particular guy to be able to pull off a purple suit. They’re not for the faint of heart, mostly because there’s literally no way to camouflage yourself whilst out in the wild. Unless you’re hanging out with a bunch of peacocks (the actual animal, not those dudes who hang out with Alessandro in Marketing) or just standing in and amongst a bunch of purple grape vines, purple doesn’t often occur naturally in nature, friends.

Thus, you’ve gotta have one of two game plans…either let the suit speak for yourself, or be ready to speak for the suit. We, personally, prefer the first option. It lets you off the hook in case you don’t actually have a personality, and it’s just easier, which also we love because we’re a little bit lazy. Think of it as basically taking a page out of Prince’s book: Yeah, he was charismatic and intelligent and interesting…when he talked. Which he didn’t actually do a lot of, mostly because he didn’t have to. You could put on this purple suit and literally just stand by yourself and not talk to anyone at the party the whole time, and people would still look at you and think, “Wow, that guy looks mysterious and interesting and charismatic…I wonder if he knew Prince?”

Get a little bit of that mysterio vibe with this Men's OppoSuits Purple Suit. It's 100% polyester (200% amazing, according to the product label), has a fully lined suit jacket, and the pants are intentionally long for styling with casual footwear. It also comes with a matching necktie (and it's not a clip-on, so learn how to tie a tie already, ya joker!). It has a slim fit design, so please consult the size chart...and if tailoring is required, the OppoSuits were made to be tailored with ease. Which again proves our point: The only thing not easy about this Men's OppoSuits Purple Suit is how much attention you'll get while wearing it.