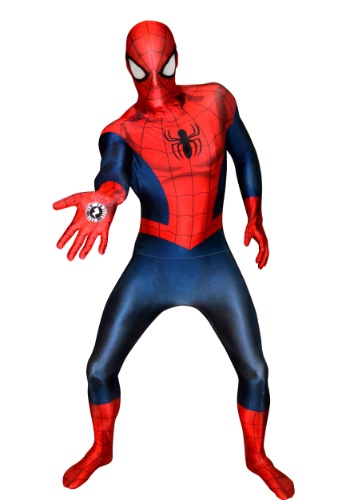 My Simplicity Sense is Tingling!

Spider-Man values simplicity. He doesn’t wear a fancy cape like Thor. He doesn’t gear up in clunky armor, like Iron Man. He doesn’t lug around a heavy shield, like Captain America. Also, he’s not cool running around in his boxers like The Hulk. That’s why his signature outfit is a simple red and blue suit that gets the job done.

The costume is easy to do acrobatic moves in. It’s got enough flair to look heroic, without being too flashy. It also lets him make full use of his spider-powers! And if simplicity is good enough for Spider-Man when he’s out there fighting crime on the streets of New York City, it should serve you quite well when you head to the party in this version of Spidey’s costume.

This deluxe Ultimate Spider-Man Morphsuit helps you look like the legendary wall-crawler himself! It’s based on the Ultimate version of Spidey. It’s a simple jumpsuit design, made out of spandex-blend material that stretches to fit. The exterior has a bright red top with the classic webbing pattern and the spider symbol in the front. The sides are the iconic comic book blue, as are the legs. The hands and feet both match the chest with the red design and the palms even have fake web shooters on them. Of course, Peter Parker always hides his secret identity with a mask. You can too with the mask on this costume! It’s bright red with the large white eyes in front.

This Spider-Man suit might not actually give you any sort of spider-powers. It will, however, make you feel as confident as a superhero when you head to any comic book convention or costume party. And you’ll remain limber enough to move around like an acrobat while those guys dressed as Iron Man have to lug around a big set of armor all day!