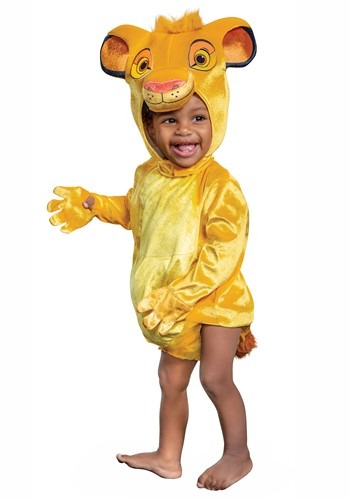 Just Can't Wait To Be King

Raising a lion cub can be a handful. When they're not waking you up so they can survey the kingdom with you, they're sneaking off to places they shouldn't be. Lucky for you, you most likely don't have a hyena-occupied elephant graveyard in your backyard. But there are still plenty of ways your little lion prince can get into trouble. He's ready to pounce on the television remote, tubes of lipsticks, or any other prey that might be laying around. And when he practices his roar, everyone listens. The wild challenge of raising this cub is all worth it though, sooner or later, he'll be king. In the meantime, you're just happy to get him to cooperate at bathtime!

Your little one is sure to be delighted with this bright, cartoonish costume. Straight out of the Lion King cartoon, you'll be singing the soundtrack to this Disney epic in no time! The sweet jumpsuit has a soft texture with sleeves and mitts that can flip away from your child's hands. The bottom of the suit opens for diaper changing access. Topped off with a detachable tail and sculpted hood that secures under the chin. Simba's face can instantly be recognized by the hood that's decorated with Simba's bright eyes, big ears, and a sweet tuft of mane.

What a Wonderful Phrase

While your little lion might be king someday, it's time to have fun and enjoy the little things, for now. Might as well watch the sunrise from the beauty of Pride Rock for now. Until then, Hakuna Matata is the name of the game! Are you and yours ready to join the pride? Check out the rest of our Lion King costumes and everywhere you look, your family will be standing in the spotlight!