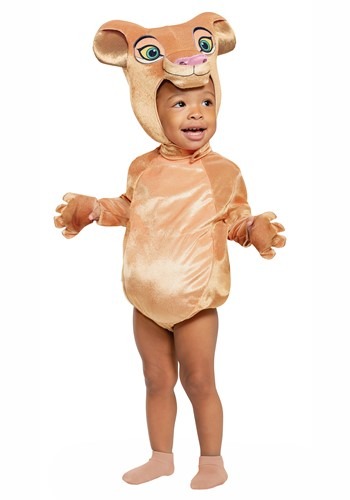 On the Side of the Pride

Simba had a rough couple of weeks as a cub. A couple of rough weeks that ended with him banished from the Pridelands by laughing hyenas and his own fear after Mufasa's death. But after those few weeks, the cub met Pumba and Timone, the Hakuna Matata lifestyle took hold. In the meantime, Nala and the other lionesses were dealing with the fallout. We don't know what that was like but we do know that Nala's strong nature blossomed over time! Nala was always smart. She knew that the elephant graveyard was a bad idea as soon as she saw the looming tusks. She was always strong, pinning Simba no matter how hard he tried. So when it came time to go out into the world, looking for help for her fellow lionesses, she didn't hesitate.

This charming costume is channeling the original cartoon from the early nineties. The suit has Nala's tawny fur color, a padded belly, and secures up the back with a hook and loop strip. With diaper changing access along the bottom, your kiddo can keep growling and pouncing all Halloween long! The costume is topped with a sculpted plush head that's embroidered with Nala's bright eyes and has her perky ears attached to the top for an instant lion silhouette. The tufted tail at the back and the hood are detachable to keep your kid comfortable, even while napping.

Maybe Nala didn't grow up with Timone and Pumba, but it didn't take them long before they were on the same team. We think the future looks pretty bright for this group of friends! Your little lioness doesn't have to worry about Scar's reign, she can simply lay back and live that Hakuna Matata lifestyle. Just don't try and feed her bugs, believe us, they are not slimy yet satisfying!