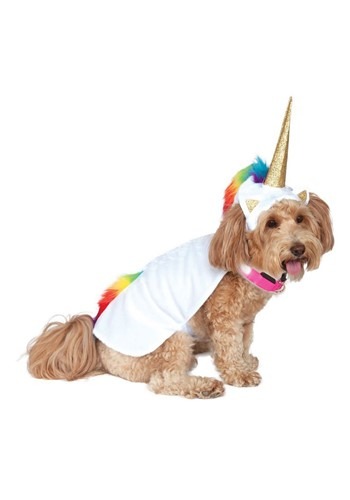 First of all, how is a unicorn even mythical? We mean, what’s easier to believe, a horse with a horn, or a leopard print horse with a 20 foot tall neck that eats leaves? Seriously. It is really unfair that giraffes get to exist but unicorns don’t.

And not only should they exist evolutionarily, but their imaginary temperament is another mark in their favor. They exude light. They can run on rainbows. They abide only the good and upright in their presence. A unicorn tear can heal any wound. C’mon. That’s way better than stupid narwhals. Narwahls have a giant horn, and they don’t do any of that. All stupid narwhals do is swim really fast at stuff and jab it.

Furthermore, unicorns are the symbol of Scotland. Scotland is a cool place... They have haggis and some of the best accents in the world! Think about it. They should have unicorns. They deserve them if anyone does.

We rest our case.

Bring some magic to your next party with this Light Up Collar Unicorn Cape Dog Costume. The 100 percent polyester costume consists of a cape attached with a parachute buckle around the neck and a separate horned hat with a hook-and-loop fastener. The bright white fabric is a stunning background for the rainbow mane and tail, which look very much like unicorns tails and manes would look if they existed. Humph.

While, unfortunately, unicorns don’t exist in the real world, nothing will stop us from providing unicorn-esque costumes. Your dog deserves to look this good everyday of the year. After all, dogs are the closest things we have to the pure love and goodness of a unicorn’s bright heart. In fact, the two are suspiciously similar… almost like… no… yes! Dogs are the distant relatives of unicorns! Yes! We solved it! Wonderful! Unicorns!