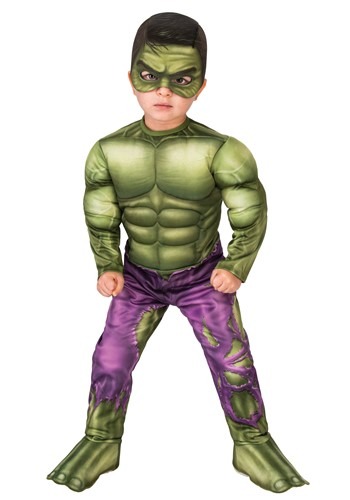 Some people don't like Hulk when he's angry. If we're being honest though, it's mostly just bad guys who don't like Hulk when he's angry. Why? Well, it's because Hulk tends to do a lot of smashing when he's mad... and it's usually directed at bad guys. If you're a good guy, or if you're nice to Hulk and give him a juice box, then he'll be totally cool with you. Of course, if your little one is the Incredible Hulk, then you'll definitely love him, especially when he's ready to go into smash mode!

This Deluxe Toddler Incredible Hulk Costume is the easiest way to transform your child into a little, lovable, green superhero! It's officially licensed and comes with everything your little Bruce Banner needs.

Straight from the Marvel Universe, this deluxe Hulk costume for toddlers has a detailed look that will help any kid turn into their favorite superhero. The Hulk costume comes with a jumpsuit that has muscle padding in the chest and arms to give your child that buff and tough look of the Avengers hero. The top portion of the jumpsuit has Hulk's green skin and bulging muscles printed onto it, while the bottom portion is designed to look like a pair of ripped purple shorts. The legs end in foot covers that fit over most pair of shoes, so your little one doesn't have to head out barefoot like the real Hulk does. Finally, the costume comes with a Hulk eye mask that fits over your child's face with an elastic band.

You'll love your little one as the Incredible Hulk... and as long as you keep on his good side, we're sure that he'll keep all the smashing to the bad guys!

Size Chart
TD
Inches
Centimeters
Costume Sizing Tips
Questions & Answers
There are no questions for this item yet. Be the first to ask a question!
Ask a Question