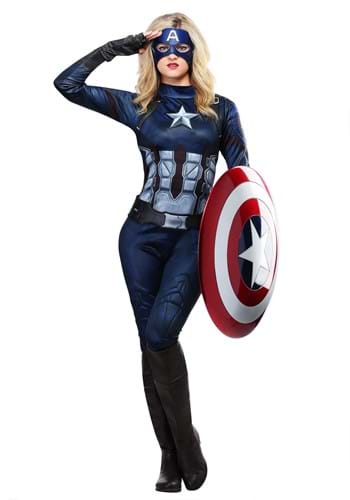 THe Mantle of captain america

Steve Rogers proves that anyone can be a hero. Just take a look at the guy before he became Captain America. He was a scrawny kid from Brooklyn, who got tossed around by every bully in the neighborhood. He couldn’t even enjoy a film at the local theater without getting pulled into a fight with some disrespectful thug. He never gave up though. He weathered every hard time and eventually proved himself worthy of the Super Soldier Serum.

If scrawny Steve Rogers can do it, then a fierce woman like you should have no problem holding the mantle of Captain America! What do you think? Are you ready to give it a try? Well, then you’re going to need one spectacular outfit to round out that superhero aura you’ve been exuding! This women’s Captain America costume should fit the bill quite nicely.

This officially licensed costume is designed to look like Cap’s outfit from the movies, except it comes in a fit for women. The full-body jumpsuit has quilted foam padding to give it a slightly armored look and it fits in back with a zipper. Plenty of printed details give it a star-spangled look and the included belt really gives you a locked and loaded style! Of course, it comes with a mask that has an “A” on it to make sure all the supervillains know that you’re the true First Avenger!

And guess what? This costume style is officially licensed by Marvel Comics. And it's an exclusive, so you're only going to find it available from us! We're fans, too, which is why we make sure to go above and beyond in our costume curation and the reason we have the biggest selection in the world. With this costume, women everywhere can now dress up as Captain America. So, what are you waiting for?