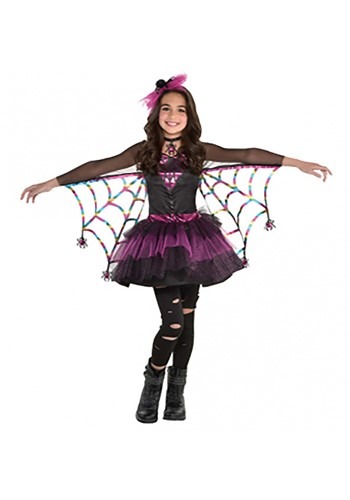 We often think of spiders as strictly creepy crawlies. Some are small, some are big, but to some people they are equally scary. Some spiders have shiny exoskeletons, while others sport hairy legs, but people shriek and run from both. But have you ever stopped to think about how beautiful some spiders are? Some have striking yellow stripes, and others have bright blue abdomens. Plus, the webs that they create are stunning pieces of engineering. Ok, that's probably not why your child wants to dress up as a spider, but it's still true! This Girl's Miss Wicked Web Costume can be both creepy and beautiful.

This costume is all about mixing spidery details with shimmering, multi-colored fabrics. The dress plays with a lot of textures. The torso of the dress is a silky satin, but then adds the harder look of the metallic pink fabric. The mesh sleeves are another great texture, which is repeated in the tiered ruffles of the skirt. The rainbow spider web is the most stunning piece, which also features little spiders dangling from the edges. But that's not all! The spider choker neckace is also included and features a large faux gem at its center. Finally, the headband tops off this look with one last spider surrounded by mesh bows.

This dress might be man-made, but the creature it celebrates is one of nature's most interesting insects. Spiders can be frightful, but they are also an important part of their ecosystems. That alone is pretty beautiful! Whether your child is looking to scare people in this webby look or is just wanting to rock a spookier kind of pretty, this dress is able to do both of those things. Time to grace others with this colorful, spidery look!