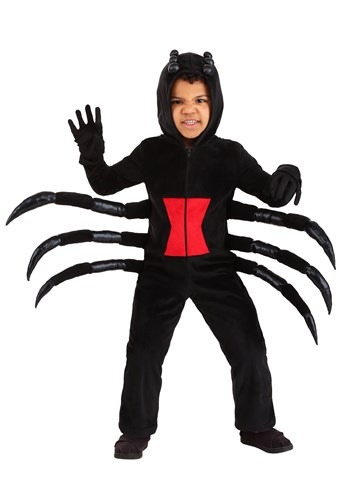 Don’t let the name of this costume fool you. When we say, “Cozy” we don’t mean cuddly or cute at all. While it may keep your little one nice and warm on those cold October nights, this costume will give you the chills!

Now, we love spiders… as long as they are plastic prop spiders used to decorate our home or office. Not the creepy crawlies that we all apparently eat at least seven of in a lifetime… that’s right, you read that correctly. Seven.

Anyways, as we were saying, you’re little one won’t be an adorable little arachnid. No, he will and eight-legged freak! With an additional two arms, it’s like something out of your scariest dreams.

Now don’t worry about having to find a radioactive spider to have your child transform into this terrifying insect killer. Our costume design team has made it much easier than that. No need to break into a hidden laboratory in the middle of the night. Simply dress your kiddo in this hooded jumpsuit.

It zips up in the front so even a toddler could toss it on with little to no difficulty. There are six spider legs attached to the left and right side of the mid to lower torso. On the top of the hood there are plenty of extra eyes, so nothing will get by your little one. At the belly of the beast, there is a blood-red marking to warn others not to mess with him.

This spider doesn’t have a taste for bugs. It wants something a bit sweeter. Don’t worry, you’ll be safe, but we can’t say the same for your king-sized candy bars.  Send you’re kiddo around the block for some trick-or-treating this Halloween and pray that he fills his treat bag up enough to suffice his monstrous sweet tooth.